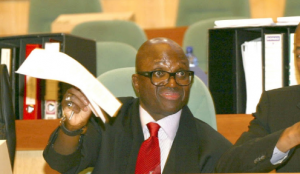 The reinstatement of one of Seth Nthai, SA’s most controversial state counsels to the roll of advocates, has exposed divisions in the legal fraternity.

Seth Nthai was readmitted to the roll of advocates late in May after he approached the high court in Polokwane with the backing of the Polokwane Bar and among others, eminent human rights’ lawyer George Bizos.

The court said the judgment, which was penned by among others, Limpopo judge president Ephraim Makgoba, was about a second chance for Nthai.

Nthai resigned as a member of the Johannesburg and Pretoria Bars when his unethical conduct — for which he has never been criminally charged — came to the fore at the height of his career.

This was after he had solicited a bribe from the claimants in an international arbitration over mining investments in SA, in which he was representing the South African government.

By his own admission, Nthai asked for a R5m bribe in return for using his influence to sway the government to settle, in an October 2009 meeting with Italian businessman Mario Marcenaro, who had recorded him on multiple occasions.

According to his application, Nthai told Marcenaro that he knew his behaviour was unethical and asked him to keep the discussions confidential.

Nthai’s fall from grace came as a shock. His CV was clearly impressive. He was an esteemed advocate and deputy chair of the General Council of the Bar at that stage. He was the first black chair of the Pretoria Bar Council and a former chair of Advocates for Transformation (AFT). He also served as a member of the Judicial Service Commission and had acted as a judge. Politically, he acted as an ANC MEC in Limpopo at the dawn of democracy.

Nine years after Nthai tried to solicit the R5m bribe from Marcenaro, he said in his application that he acted with greed and to further his own financial interests.

Adding to that, Nthai took the court into his confidence, which he did not do when he was facing disciplinary action at the Pretoria Bar, saying he was depressed and had anxiety at the time. These conditions had formed part of the “primary defects” which led to his name being struck from the roll.

The high court in Polokwane said Nthai had shown remorse and had not fallen back into the same unethical ways over the past few years of employment.

The court went further and quoted Nthai’s counsel in the judgment, saying that he had pleaded with “sanguine” in his voice that the Johannesburg Society of Advocates, the Pretoria Society of Advocates and SA Legal Practice Council find it within their hearts to forgive him.

His readmittance will, however, not go down without a fight. The Johannesburg Bar has already lodged an appeal.

Kennedy Tsatsawane SC said the Johannesburg Bar filed its application for leave to appeal against the judgment on Tuesday, as it maintained that Nthai was still not fit and proper to be an advocate. He, however, said the Limpopo Bar was entitled to take the decision which it did.

It is unclear whether the Legal Practice Council will appeal, while General Council of the Bar chair Craig Watt-Pringle said no decision has been taken yet over whether the Bar will apply to become an intervening party.

Watt-Pringle did, however, say he believes there are clear grounds on which the matter ought to be taken to a higher court. These include the merits for readmission, as well as the question of the legal standing of the bars in question.

Whether Nthai’s status as an advocate will be discussed at the General Council of the Bar’s annual general meeting in July remains to be seen.

-businesslive.co.za
This report does not necessarily reflects the opinion of SA-news.