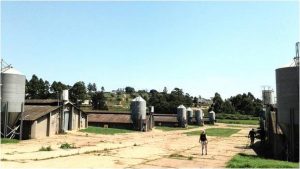 The farms bought by the eThekwini Municipality from Rainbow Chicken two years ago to save and create jobs have been left barren.

The city spent R15million on the acquisition of Uitkomst and Doornrug farms in Cato Ridge when Rainbow Chicken, which has since been renamed RCL Foods Limited, announced the sale of their farms due to tough trading conditions.

The DA conducted an oversight inspection this week and found the farms were neglected and falling apart. The party’s premier candidate Zwakele Mncwango said the municipality had not lived up to its plan and failed the employees of RCL Foods who were left jobless when the farm was shut down.

About 1350 workers lost their jobs than when the farms were sold.

“Many people who used to work here are languishing in poverty without jobs whilst an establishment that cost millions of rand is lying there, deserted”, said Mncwango.

“I suspect the transaction was not intended to save jobs but instead it was to benefit individuals. At the time of this project, I raised concerns about acquiring this establishment, warning the ANC about not having a business plan to run such a huge establishment,” he said.

Mncwango said he would request an investigation of the deal.

“Someone must account and we want the eThekwini municipality to tell us how much it will cost to bring back this establishment to full operational standards,” he said.

However, the city said the farms would be up and running by next year.

Speaking to emerging farmers at the launch of Agribusiness Access to Markets, a project that falls under the city’s agriculture unit this week, mayor Zandile Gumede said the municipality received a letter of intent for the supply of chickens from the local abattoir.

“Negotiations are at an advanced stage with commercial partners which will assist with operations of the Cato Ridge chicken farm,” said Gumede.

The deputy head of Agribusiness, Vuyo Jayiya, said the municipality would create a joint venture with commercial partners and former employees who formed themselves as co-operatives. He said they had also completed training in poultry development.

“Once we have finalised our agreements, perhaps in the next two months with these individuals, we would go to the committee to seek authority to enter into a partnership. It would only make sense to reinvest in the farm when we know it’s going to be in production. We are hoping come 2020 the farm would be operational,” said Jayiya.

Gumede also announced at the launch that they were in negotiations to establish rabbit hubs.

“The city is currently in negotiations with Coniglio (a rabbit meat farm) for the establishment of rabbit hubs, where we will lease business accommodation to local businesses that qualify and set up 150 rabbit operations per SMME so that they can participate in the lucrative rabbit market which is highly export-orientated,” she said.