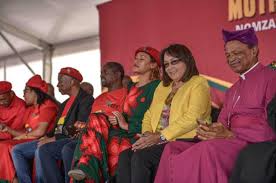 Cape Town Mayor Patricia de Lille is expected to give reasons to the Democratic Alliance on why she attended a memorial hosted by the Economic Freedom Fighters for Winnie Madikizela-Mandela.

DA Federal Executive chairperson James Selfe said that De Lille was required to consult the party before she attended the memorial service in Brandfort, Free State, where Madikizela-Mandela was banished by the apartheid regime.

“There are other occasions where we speak at other people’s rallies and that’s an exceptional circumstance. But to have done so without any consultation is a little odd,” Selfe said.

De Lille’s office confirmed that the mayor was invited to attend the memorial by the Madikizela-Mandela family. DA Free State chairperson Patricia Kopane was also in attendance.

In the programme for the memorial, de Lille was described as a “special colleague” to the EFF. She was warmly hugged by leaders of the red berets and was applauded during her speech on Madikizela-Mandela’s life and influence.

In an emotional tribute, De Lille said that Madikizela-Mandela has taught her to be fearless in politics.

The Cape Town mayor, who is facing two separate disciplinary hearings into her conduct, may now also be challenged by a second motion of no confidence into her leadership in the City of Cape Town, according to a report by the Cape Argus.

JP Smith, the mayoral committee member for safety and security in the City, told the newspaper that the DA caucus would meet on Monday to discuss the mayor. De Lille said that she was unaware of the meeting.

The DA at its Federal Congress introduced what has widely become known as the “De Lille clause” into its policy. The clause allows DA leaders in governance to be recalled if they have lost the confidence of the party caucus.

While the party has insisted the clause cannot be used retrospectively and therefore won’t be used against the mayor, Smith, an influential DA leader in the Cape and opponent to De Lille, has said suggested otherwise.

“The recall clause means we cannot apply this clause retrospectively, and this means we have to start from scratch. Should the caucus decide to proceed, we will have to get approval from the federal executive,” Smith said.

De Lille survived a previous motion of no confidence earlier this year after ANC and EFF members voted for her to remain in office. The ANC has said that it continues to support De Lille.