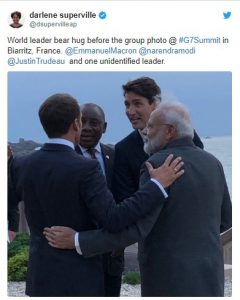 An American journalist has drawn the ire of South Africans after she tweeted a picture of world leaders at the G7 Summit in Biarritz, France, identifying three heads of state except for President Cyril Ramaphosa, whom she refers to as an “unidentified leader”.

“The working visit will also provide a platform for President Ramaphosa and members of Cabinet to invite global partners to experience South Africa as an investment destination and trade partner, and to participate in the country’s efforts to secure faster, sustainable and inclusive economic growth and reduce unemployment,” the Presidency said in a statement.

But Ramaphosa seemingly failed to make an impression on Superville, who has since not removed or corrected her tweet, despite South African tweeps completely losing it and pointing out her ignorance.