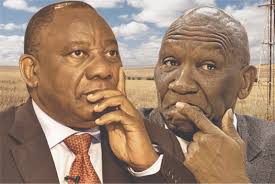 Cyril Ramaphosa responded to dr. Pieter Groenewald’s question to him in parliament by answering that he condemned farm murders just like the murder of any other South African, but believes that ethnicity must be overlooked because every life has equal value.

He points out that in November 2018, in response to a parliamentary question, he said that violent crime throughout South Africa is a matter of serious concern, regardless of where it is or who it affects. He cited the answer saying he had to condemn all murders in the country, including those on farmers and farm workers, and that the government was committed to doing everything possible to defend every citizen from all forms of violence, regardless of where they live or work.

Network 24 reports that Ramaphosa says the question indicates the distance that the nation still has to go after effective reconciliation and the recognition of the equal value of every life in the country.

“This is the degree of some of our society’s inability to look beyond the ethnic enclaves of our past.”

“Every life in this country has equal value and every murder in every violent crime must be condemned without distinction,” Ramaphosa said in Afrikaans.