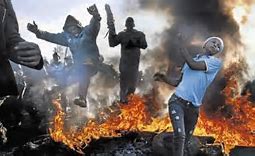 While the unrest in the Western Cape has forced the government to deploy the unarmed soldiers of the Defense Force in the hope that the violence will stop, it is Gauteng who is leaving the area in chaos with just as much force.

The gang violence in the Western Cape has already claimed the lives of many people in recent weeks, and now the north of SA also has a violent crowd that burns shops and houses at a faster rate than the ANC can erect new buildings.

More than 20 foreign-owned stores went up in flames, but not before the looters and their children stole the usable goods.

With all this, and much more violence elsewhere, the ANC’s president, Cyril Ramaphosa, is silent and frightens Africa so much that they are now boycotting the World Meeting in Cape Town.

Ramaphosa doesn’t say a single word about it either.