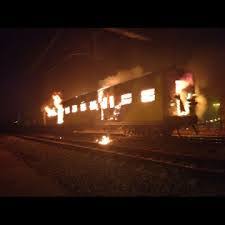 The two latest incidents in which two trains of Metro Rail in the Western Cape went up in flames bring the struggling entity even closer to a financial abyss.

The trains were destroyed by the fire, and workers using the service later had to make other arrangements to get to the workplace.

Metro rail’s total number of trains and passenger vans have been attacked and burned by vandals over the past few years so that they currently have less than half their trains left in the Western Cape.

The Metro Rail said in a statement that the Cape Town railway station platforms 9, 10, 15 and 16 were so affected by the fires that they were closed, and that the railway station would also be closed for several hours.

All train services are canceled until later notice, and commuters will have to make use of alternative transport.

The damage from the fires amounted to almost R500,000, and the future of train transport for workers has now been in the balance.

Nearly 18 passenger vans collided with the two locomotives, and will cost billions to replace.