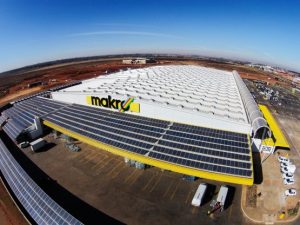 Forward-thinking businesses in SA are now starting to confront life without Eskom by putting plans in place to generate their own energy.

Anglo Platinum and Sibanye-Stillwater are two high profile companies at an advanced stage of planning for solar plants to generate their own electricity. The City of Joburg wants to cement a deal with Harith-owned Kelvin Power Station to purchase power as a way to prevent load shedding, which has done incalculable harm to businesses in the city.

Other companies are further advanced in their plans to reduce their dependence on Eskom power. In 2016 Makro erected solar panels on the roof of its Makro Carnival store on the East Rand to generate 60-80% of its energy needs during the day, equivalent to 30% of the store’s annual energy needs. Many smaller businesses have invested hundreds of thousands of rands in generators to serve as back-up power sources in the event of outages.

‘No plan’ from government

In his state of the city address last month, Joburg mayor Herman Mashaba said load shedding would be a reality in the coming years, and the national government had not come up with a plan to solve it. Though Eskom has attempted to block the city from sourcing electricity directly from Kelvin Power Station, Mashaba said he was looking at legal options as well as a direct approach to Kelvin over the prospect of securing a supply contract.

Kelvin has a 600 megawatt (MW) capacity, but is currently producing just 200MW, and even that will be shut down within the next two to three years. One of the options being explored is the installation of gas turbines from about 2023 onwards to ramp up output to the original design capacity of 600MW, pending the availability of a reliable gas supply. This is still just a fraction of Joburg’s total electricity consumption, but sufficient to prevent most of the outages experienced by businesses over the last six months.

The City of Joburg’s 2018 financial results show a 6% drop in electricity sales. Though some of this was due to outages, there is also evidence of businesses switching to alternative energy sources, according to Ratings Afrika’s latest Municipal Financial Sustainability Index (MFSI) for 2018.

Des Muller, MD of energy advisory group NuEnergy Developments, says there is a direct correlation between SA’s declining economic growth and the commencement of electricity blackouts starting in 2007.

“Stable and sufficient electricity supply is a precondition for any growing economy, and there is plenty evidence from around the world that those countries that can guarantee reliable power at a good price are those countries that grow the fastest,” he says. He warns that South Africa’s electricity challenges will remain in the foreseeable future and companies need to be prepared, but urges taking sound independent advice before plunging into self-generation solutions.

In 2012 Eskom paid energy-guzzling aluminium smelters to shut down furnaces so it could redirect power for use elsewhere in the economy. This has driven energy-intensive businesses to other countries in the Far East where power supply is stable and affordable.

As part of its medium- to long-term energy management strategy, Sibanye-Stillwater is pursuing the first 50MW phase of its solar photovoltaic (PV) project to be built on a site strategically placed between the Driefontein and Kloof mining complexes on the West Rand. “The project, originally envisioned in 2014, represents a partial solution to securing an alternative electricity supply, representing approximately 3% of our total electrical energy requirements in SA, and enables the power generated to be fed directly into the mine’s electrical reticulation while reducing our overall electricity expenditure and carbon footprint,” says the group’s head of investor relations, James Wellsted.

“We cannot disclose costs of the plant or the cost of the electricity through the PPA [power purchase agreement], however, we can state that solar PV power offers a cost-effective alternative to Eskom already.”

Sibanye-Stillwater ran a competitive tender process to appoint a developer to build, own and operate the project, and sell power back to the mining group through a PPA. This approach has a minimal upfront capital requirement for Sibanye-Stillwater and allows capital to be prioritised for core mining projects. The tender was successfully concluded in 2017, suggesting a significant forecasted return to Sibanye-Stillwater over the course of the agreement. Although several regulatory delays (including policy uncertainty and contracting issues relating to Eskom) were experienced in 2018, resolutions are expected to be reached in 2019. A decision to proceed with the PPA will then be made.

Though Anglo Platinum has yet to make a final investment decision, it is exploring a 167 gigawatt hour (GWh) per annum solar PV plant at Mogalakwena, representing roughly 21% of its annual 777 GWh consumption.

Anglo Platinum says it wants to optimise the value of its overall portfolio, including improved energy management and planning for future energy sustainability in response to rising cost pressures in the mining sector. Efficiency measures have been implemented since 2013; however, this is not enough to counter the projected cost increases and the requirement for sustainable energy.

Anglo Platinum is considering one of two options for the project development: the IPP option, or to self-build, own and operate.

These projects require a generation licence from the National Energy Regulator of South Africa (Nersa) and exemption from the minister of energy.

Based on current progress, the solar generation plant should be operational by mid-2021.

Brought to you by MoneyWeb.