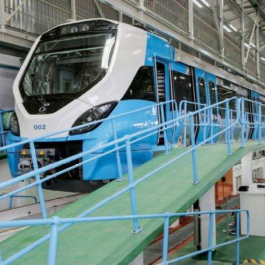 President Cyril Ramaphosa has officially launched a new multibillion-rand train manufacturing factory at Dunnottar Park in Nigel, Gauteng, during the past week.

The 72-hectare site at Dunnottar Park, which cost R1 billion, consists of a Supplier Park and Rail Training School, which will manufacture, assemble, test, commission and deliver 580 new commuter trains.

This massive investment will include the local manufacturing of parts, maintenance, training facilities, the creation of jobs, skills development, the achievement of a 65% local content, and it will promote black economic empowerment and support communities.

The launch of the train factory will create much-needed jobs and job opportunities while attracting investment and boosting the economy of the country.

The plant is scheduled to deliver two new trains by December 2018, a further nine trains by March 2019 and an estimated 56 trains over the next two years.

The launch is part of government’s 20-year Modernisation Programme aimed at revitalising the rail industry and training and skills development for the Passenger Railway Agency of South Africa (Prasa) employees and young people interested in the rail industry.

Who will be employed here?

Construction of the factory began in January 2016, with manufacturing activities starting in 2017. According to the government officials, the overall employment equity constitutes 49% female and 51% male, with 635 full-time employees, 90% of whom are black. However, there is a different story when you listen to the community residing nearby. Many disgruntled community members claim that the company is not employing nearby residents. Word, is going around that the new factory is hiring Chinese employees and not local residents. On several occasions local residents have showed their anger over employment issues by protesting in and around surrounding areas, barricading roads, threatening to take action by burning down schools and municipal structures.

This is no secret among residents in nearby communities that employment opportunities for local residents, is of no existence at the new factory. Actions speaks louder than words.

It seems to be that Chinese is the new black?