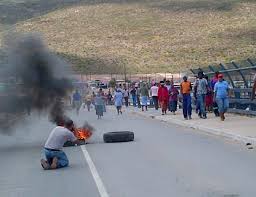 As in the past, the ANC once again motivated the people of De Doorns and the surrounding area not only to protest, but also to occupy the N1 with stones packed and vehicles hidden under the stones.

No official spokesperson has been identified as a leader, and all that is known is that the violent riot was orchestrated by people who apparently were not farm workers, but who were setting up farm workers to run amok.

The rioters are acting exactly as was the case in 2012, and unconfirmed reports state that they are the same instigators as seven years ago when the N1 was also made impassable.

Dissatisfaction prevails in the workers after the rate of R14.51 per hour is lowered to R10.60 from a particular worker, and the daily wage paid to the low-paid worker is R90 per day while the highest paid worker is R130 per day.