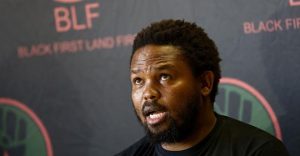 The Black First Land First (BLF) movement told the Equality Court on Tuesday that it was not ready to face its hate speech trial.

Black First Land First president Andile Mngxitama denies that slogans such as ‘kill the farmer‚ kill the boer’‚ ‘dubula Ibhunu’‚ ‘one settler‚ one bullet’ and ‘land or death’ are racist or constitute hate speech.

The organisation was due to appear in court on allegations that its slogans amounted to hate speech against white people. But through their newly appointed attorney, Mpho Matolo, the BLF made a plea for the matter to be postponed.

Maloto told the court that he was appointed only a few hours before the matter was due to start, and was unable to proceed because he wanted to consult his clients.

The complaint against the BLF was was lodged by Lucy Strydom last year. Strydom also asked the Electoral Commission of SA to review the BLF’s eligibility for registration as a political party because of its statements.

Strydom said the BLF had the potential to influence public discourse and could not be allowed to continue to propagate its rhetoric of violence and death aimed at white people.

“These slogans emanate from the apartheid era. The slogans at play are ‘kill the farmer‚ kill the boer’‚ ‘dubula Ibhunu’‚ ‘one settler‚ one bullet’ and ‘land or death’‚” Strydom said.

Strydom is being represented by the SA Human Rights Commission (SAHRC).

The magistrate was expected to listen to arguments which were delayed due to the unavailability of the advocate who previously represented the BLF.

Magistrate Sibanyoni, however, said that the matter needed to proceed because it had been subject to delays.

“The matter cannot be delayed any further. It is in this court’s interest to conclude this matter … remember, justice delayed is justice denied,” he said.

However, Mngxitama accused Sibanyoni of being unreasonable.

“This matter is not near ready to be heard, and in fact the magistrate is misrepresenting us when he said that this matter was set for today and we would be ready to proceed and all that. We have raised several times with this magistrate our financial difficulty…” he told TimesLIVE.

Sibanyoni ordered the BLF to find the previous advocate by noon so he could proceed with the matter. This is despite the SAHRC’s legal team agreeing to a postponement to allow for Matolo to familiarise himself with the case.

“We need to be properly represented, that’s what the constitution says. There’s no urgency. What is the urgency? The magistrate today is simply being unreasonable, there is an agreement between the parties [SAHRC and BLF], why must he [the previous advocate] be the third party?” said Mngxitama.

He said the chances of getting hold of the advocate were slim and even if he was to report to the court, the BLF was not ready to proceed.

Strydom is pleading with the court to declare the statements as hate speech‚ on the basis of race.

Mngxitama denied that any BLF slogans amounted to hate speech or racism.

On Monday evening, the BLF said in a statement that the slogans were in response to the historic and current land dispossession.

“BLF regards this assault by the SAHRC as part of a well-orchestrated campaign by white monopoly capital to ban BLF from representing the black oppressed in parliament,” the BLF said in the statement.

This is not the first time in which the party finds itself under fire for remarks labelled by many as hate speech.

At a rally in Potchefstroom in North West on December 8, Mngxitama urged his supporters to kill five white people for every one black person killed.

While the movement said it was not ready to proceed with the case, Mngxitama said there was a possibility to settle out of court which was still being explored by both the BLF and SAHRC.

By: Times Live
This report does not necessarily reflects the opinion of SA-news.