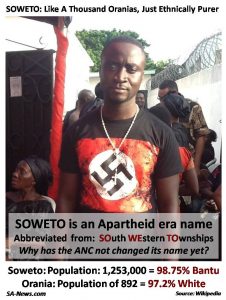 The announcement by the Cape Town Mayoress, Patricia de Lille, about the composition of her new management team, for the City of Cape Town, is a slap in the face for the city’s white taxpayers, says Ms. Erika Botha Rossouw, FF Plus councilor for the city.

Miss Botha Rossouw says that apparently no white person is good enough for the mini-mayor team, which gives the impression that she is still embroiled in the “struggle” against whites and does not accept the changed South Africa and its diverse people.

She said the message sent out by the Mayoress’ team composition is that although whites are the largest share in the payment of taxes to the city, they are being further marginalised in the anti white style of the ANC regime nationwide.

“White people should take heed that they are good enough to pay taxes to the DA run municipality, but that they have no say about how and where the money is used. De Lille’s management style is clearly of a leftist socialist slant and as a result Cape Town currently has a massive crisis as far as water supply is concerned because she and her Democratic Alliance predecessors had done nothing to double the water supply, to match the influx of African migrants with the resultant doubling of Cape Town metro’s population.

“The FF Plus will not let them get away with this, The DA is further trampling minority rights of any community – in this case those of the city’s minority white population. This is simply unacceptable, “said Botha Rossouw.