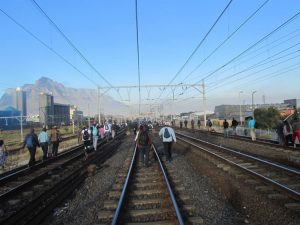 MetroRail operating in the City of Cape Town is struggling to fulfill its transport duties as sabotage continues to cripple the service.

The last three years have been a nightmare for MetroRail, which has, on average, lost over 50 carriages a year due to arson and vandalism. Operations have been especially hard hit this year, with two arson attacks in July gutting a further 10 carriages, costing the City R50 million.

MetroRail services can no longer meet demand
But it’s the cost on the community which is most apparent, as the number of trains on tracks drops to below 50. City officials note that at least 80 functioning trains are required to service Cape Town and surrounds.

As reported by IOL, hour-long delays between Van der Stel and Strand, forced the passenger rail operator to provide alternate transport, via minibus taxis, to stranded commuters on Tuesday.

“It is a challenge for Golden Arrow Bus Services to assist us as well while they have their commitment to serve their customers.”

Commuter safety the biggest issue
The main issue facing commuters, aside from MetroRail’s frustrating delays, is that of passenger safety. Recently a violent train attack left one man dead and eight others seriously injured; one victim in a critical condition, with a knife blade embedded in his skull.

Mihi pointed to a recent attack on MetroRail staff and its negative impact on operations, saying:

“A recent example was that of a staff vehicle that was held hostage by taxi drivers in Du Noon (Milnerton) – this was in the news recently, where the MEC for transport was alerted and had to intervene. On our part, we would also like to reduce the risks of similar incidents happening.”