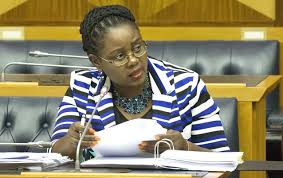 Newly appointed Communications Minister Mmamoloko Kubayi says Cabinet is happy with the appointment of a new board at South African Airways.

Yesterday Finance Minister Malusi Gigaba announced the axing of former SAA board chairperson Dudu Myeni, who has now been replaced by Johannes Bhekumuzi Magawaza. Anglo American board chairperson Nolitha Fakude has been appointed as Magwaza’s deputy.

On Thursday Kubayi delivered her first post-Cabinet media briefing since being moved from the energy department in President Jacob Zuma’s shock Cabinet reshuffle.

She said, in its meeting yesterday, Cabinet conducted a thorough discussion about the planned leadership changes at the troubled state airliner and was happy with the selected candidates.

“Cabinet did discuss SAA when the names were put through. A detailed discussion does happen to understand issues and how the individual will help SAA,” Kubayi said.

“We are confident from Cabinet’s point of view that things will definitely turn around because we needed stability in terms of board appointments and stability in terms of the executive. And if you look at the board that’s been appointed we’ve got somebody with aviation expertise so that’s why Cabinet has confidence”.

Despite Myeni’s removal the Organisation Undoing Tax Abuse (OUTA) says it will forge ahead with legal action against her after it launched a court bid in March to have her declared a delinquent director.

Kubayi says Cabinet would not interfere in the matter between OUTA and Myeni as the organisation has the constitutional right to take legal action.

She said Cabinet discussions on SAA did not touch on Myeni and her impact on the airliner.

“We look at issues we don’t look at people. We look at the issues about the state entity because otherwise we will be distracted,” Kubayi said. “Cabinet does not say whenever somebody is leaving we start reflecting on that person, we deal with entities from the report.”

OUTA, however, has blamed Myeni for SAA’s problems and insisted that further action needed to be taken against her.

Since Myeni was appointed to the SAA board in 2008 it is reported that government has spent more than R23 billion on bailouts for the national carrier.