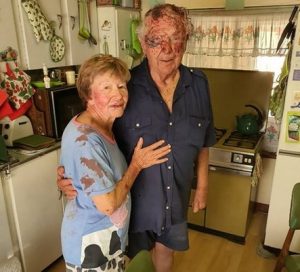 Six farm attackers smashed a firearm to pieces on the heads of the elderly couple, Gert (81) and Joey (75) Pienaar from Dewetsdorp in the early hours of Monday morning.

The couple heard a window break in their home on the farm shortly after midnight on Monday morning, but before they could do anything, they were attacked in their bedroom.

The men demanded the safe’s keys and money.

Jannie van Tonder, the couple’s son-in-law, says the attackers hit them over the head with a glass bottle and a rifle flask and also stabbed them with a knife.

“My father-in-law’s shin was kicked and they assaulted my mother-in-law and stabbed her in the arm.”

“The terrorist apparently believed there was a lot of money in the house and broke open to the floorboards and flipped the whole house in search of money,” says Van Tonder.

The attackers tied up Gert and Joey, but she was able to untie herself and escaped to seek help.

The attackers, meanwhile, stole two handguns and a small-calibre rifle, a purse and cellphone and fled on foot according to all indications.

Van Tonder says Joey walked about a mile away, barefoot and injured, to neighbors, Johan and Mercia de Beer, to get help.

A barn was also broken into on the farm last week and on Tuesday 17 December, the Pienaars heard at night that there were people in the front house.

Van Tonder said some of the house’s burglar bars were broken open.

The couple was admitted to Life Rosepark Hospital in Bloemfontein on Monday morning for observation.

He believes the attackers will be arrested soon.