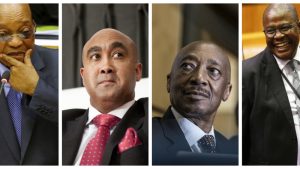 Jacob Zuma
The former president — who resigned in February — faces several charges including one count of racketeering, two counts of corruption, one count of money laundering and 12 counts of fraud which date back to the 1990s. Zuma has claimed that he is being pursued for political reasons and has denied all wrongdoing. However, his financial adviser of the time, Schabir Shaik, was imprisoned for bribing him.

Zuma appeared in court on April 6, but his case was adjourned until June 8. Bloomberg has reported that Zuma’s lawyers are considering state prosecutor Billy Downer’s proposal to begin the trial in November.

The former president’s second legal battle is over the payment of his R10-million in legal fees. Last month, the Pretoria High Court ruled that he was liable for the amount following his unsuccessful attempt to stop the release of the ‘State of Capture’ report.

To add to Zuma’s legal battles, Bloomberg reports that he faces another lawsuit after the Democratic Alliance announced its intentions to file a lawsuit forcing Zuma to repay over R32-million in other legal fees incurred in his attempt to “fend off criminal charges”. TimesLive reported that the party also intended to stop the former president from receiving more state money to fund his defence.

In March this year, the Mail & Guardian reported that Zuma had agreed to payback the public funds spent on his various legal battles in the event that he was found guilty of the charges levelled against him.

Shaun Abrahams
The National Director of Public Prosecutions appealed a December ruling by the Pretoria high court which would have had Shaun Abrahams vacate his position in favour of his predecessor, Mxolisi Nxasana.

The court had ruled that the agreement between Nxasana and Zuma to leave the position as NPA head in 2015 was unlawful. The Constitutional Court, which heard Abrahams’s appeal, is yet to deliver a verdict. Before Zuma resigned from office, he joined the appeal against Abrahams’s dismissal. But the case was dropped after Cyril Ramaphosa assumed the presidency in February this year.

The three, who were accused of being part of a Sars “rogue unit” which spied on the now defunct Scorpions team and the NPA in 2007. They appeared in the Pretoria magistrate’s court in April and their trial has been transferred to the high court. The case was postponed until June after the state stalled the handover of legal documents to the defence lawyers,.

Tom Moyane
The former Sars commissioner was suspended in March after President Cyril Ramaphosa announced that he had lost confidence in his leadership at the revenue service.

“These are not ordinary circumstances. Protecting SARS and by corollary the public interest must be my primary concern,” Ramaphosa wrote in the letter, saying he had no choice, in the public interest, to suspend him pending disciplinary proceedings.

Tom Moyane faces 12 misconduct charges and will likely be dismissed from his position.

Moyane will face a disciplinary inquiry this month, which will be headed by Advocate Azhar Bham, SC. Former Constitutional judge Kate O’Regan had previously been appointed, but Moyane has asked that she be recused from the matter, citing her potential bias. O’Regan is a board member of non-governmental organisation Corruption Watch — which Bloomberg reports — has labelled Moyane a “treasonous criminal”.

The suspended Sars boss has said that he will relinquish his post if he is paid the equivalent of 18 months’ salary. If not, he has threatened to head to the Constitutional Court.

Brian Molefe
The former chief executive of Eskom is continuing a legal battle to keep the R30-million pension payout that he was awarded less than two years ago. The high court in Pretoria ruled in April that the payment to Brian Molefe had been illegal, ordering him to return the R11-million that he had already received. The court has refused his leave to appeal, which now has Molefe petitioning the Supreme Court of Appeal.