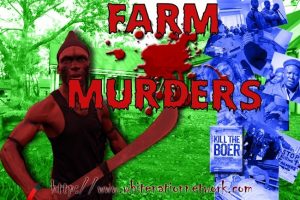 This past month of May 2019 saw an unprecedented escalation of rural attacks and murders on farms in South Africa.

The attacks now seem to intensified as-if there is an urgent hidden agenda to execute some very sinister agenda timeline since Cyril Ramaphosa claimed the presidential chair as his own in a soft koo-de-etat during the recent election vote rigging escapade that left most minority parties totally speechless.

WHITE South Africans and white South African farmers have been persecuted for a while now. They are forced to fear for their lives. It was getting news coverage a bit at one point, and politicians promised a change would come. But things are only getting worse. Most stories do not even make the mainstream news. But this one did. This probably is going under the radar as it is not high up on the level of political correctness.

Cyril Ramaphosa vehemently keeps on denying the fact that farm murders take place– and also is very reluctant to act on the pressure to look into farm murders. But then we understand why: Ramaphosa is an out-and-out black racist that hates white Afrikaners with a passion. Remember his racist “Boil the white Frog” rhetoric? Furthermore, can Ramaphosa not now acknowledge a hard fact he just denied a few months ago. He knew he was lying – and now are hiding from his own lies by refusing to admit he lied.

Such dishonest and unreliable word-spinner is Ramaphosa. There have been 184 farm attacks and 20 murders in the past five months, with Afriforum saying 16 attacks and three murders had been recorded in the Western Cape this year.

WHILE THOUSANDS OF CASES ARE REPORTED OF BLACK ON WHITE BRUTAL VIOLENCE AND GHASTLY MURDERS- NOT ONE CASE COULD BE HIGHLIGHTED OR TRACED OF ANY WHITE ON BLACK VIOLENCE OR MURDERS. YET THE ANC REGIME BLAMES WHITES FOR “RACISM.”

IT IS TIME THE WORLD AT LARGE AWAKE FROM THEIR SLUMBER AND SEE WHAT REALLY IS GOING ON IN THEIR “DEMOCRATIC” MESS THEY CREATED IN SOUTH AFRICA. If the world at large claim the white genocide in South Africa to be fake- so also must the Holocaust be fake- for you cannot be condemning the slaughter of one race- while in the same breath condoning the other. That qualifies you as an ignorant hypocrite.