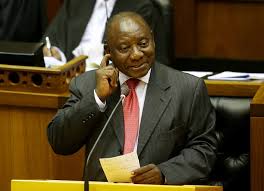 We expect a few shockers and some expected changes. As President Cyril Ramaphosa, on Thursday, addresses the National Council of Provinces (NCOP) at the Alberton Civic Centre, in Ekurhuleni, his office has indicated that he will announce a cabinet reshuffle later in the afternoon.

When is the Cabinet reshuffle announcement?
At 15:00 on Thursday, 22 November, South Africans will find out who will take up the vacant positions of Minister of Home Affairs and Minister of Environmental Affairs, as well as find out about any other shuffles that will take place.

On the presidency’s official website, the statement was published highlighting the motivation behind the reshuffle.

Cabinet reshuffle: Expected changes and safe positions
We will not expect to get any more insight into the reshuffle as the Presidency has warned the media that questions will not be entertained.

The position of Minister of Finance that was filled by former South African Reserve Bank (SARB) governor, Tito Mboweni, can be expected to be exempt from the reshuffle.

Mboweni replaced the embattled Nhlanhla Nene, who graciously bowed out after he was implicated in the state capture scandal that is centred around the controversial Gupta family.

Cabinet positions like the Ministry of Public Enterprises and the Ministry of Social Development have been in the spotlight for the wrong reasons this year. It would not be surprising if Ramaphosa makes changes there too.

The president is set to make his way to the Union Buildings, in Pretoria, after his engagement with the NCOP to deliver the update to the nation.

We will be on standby to provide updates as they trickle in.