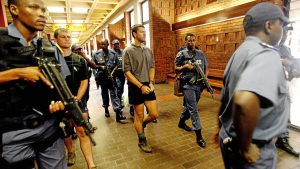 The Pretorius brothers who were part of the so-called Boeremag case, which many saw as ANC’s revenge for mandela’s incarceration and a sham by the intelligence services to gain more Slush Funds, came back to life today, Monday, 26 September 2016, when the two Boer prisoner brothers (who are not even classed as political prisoners and are in with the normal criminal prison population), brothers, Dr Johan and Wilhelm Pretorius, appeared in front of their trial judge, Judge Eben Jordaan in the High Court Pretoria, asking for leave to appeal. The brothers have been imprisoned almost 14 years and waited nearly 11 years before being sentenced in October 2013. The brothers are personally handling their appeal since the Legal Aid Board has not appointed them any legal representation.

The acts on which the case was built, commenced in 2000 and evolved as a Crime Intelligence operation till the beginning of the trial on 19 May 2003.  The two brothers were since 2002 in custody until their sentencing on 28 October 2013.  After 11 years of awaiting trial detainees, they were sentenced a further 35 years for high treason, of which 10 years is suspended and 5 years for manslaughter and 8 years for conspiracy of attempt to commit a crime.

They produced papers of 40 pages in which they showed that Judge Jordaan erred in his verdict and sentence.  It includes aspects which are based on an unfair trial according to the Constitution as well as several international treaties and law which were not obeyed.

A leave to appeal application is supposed to be filed within 21 days after sentencing.  They therefor ask condonation for the almost 3 year late filing of their application for leave to appeal.  Some of the reasons they convey are: the problems they experience at Correctional Services, for about a year they were denied use of their computers and the delay is furthermore the result of their incarceration circumstances, the lack of communication and the Legal Aid Board’s tardiness.  The mere extent of the case, of which the record alone is more than 61 000 pages with more than 60 000 pages of evidence, made it impossible for them, within their circumstances, to have applied for leave to appeal on an earlier stage.  They are appearing in person, because the Legal Aid Board still had not yet appointed their advocate to handle the case.

The basis of their application, of which they are of opinion that the court erred in its findings, includes the following: the fact that the trial lasted longer than 11 years and that the juristic process is still not completed.  The length of the trial and the extent of the case, makes it per se impossible to exercise their right to appeal. 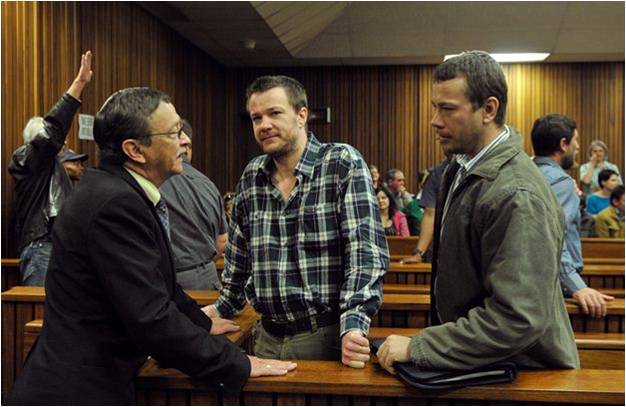 The two Pretorius brothers, Dr Johan (middle) and Wilhelm (right) in conversation with their father, Dr. Lets Pretorius, during the trial in the court of the Pretoria High Court.

They argue that it is unconstitutional that the state essentially based their case on the testimony of accomplices, especially viewed in light that the Geneva Convention in regard armed conflict, should have been applied, since a war was declared.  They therefor argue that judge Jordaan erred to have found that they should be tried as common criminals and not be reckoned as prisoners of war.  There were war declarations and several evidence, attested by the state and the judge, which was indicative of it.  In connection to it, they argue that judge Jordaan’s ruling on the Prisoner of War application is exactly the opposite than his ruling during his verdict and especially sentencing.  During the Prisoner of War application he ruled them to be only a small band of thugs without any effect and during the sentencing they were portrayed as the most dangerous people who endangered that whole state.

The state as well as the court committed grave breaches of international rules and laws of war by not determining the whether the status of Prisoner of War was applicable or not, but that onus was placed on the brothers to raise the aspect, 7 years within the trial at almost the closing of testimonies.  They argue that they were not effectively represented by legal counsel, which violated their right to a fair trial.

Several applications were brought during the trial by which the accused alleged that their legal documentation and instructions to their legal representatives were confiscated and that their consultations were eavesdropped.  They sufficed such evidence to the effect, including the testimony of an ex-security police officer who was the first handler of the main witness for the state and agent provocateur, JC Smith.  The brothers argue that the court erred in finding that their rights were not violated.  They also argue that judge Jordaan was subjective and personally involved during the sentencing, due to the fact that the two brothers brought an application against him to recuse himself from the trial.  How a trial is conducted, should not have any impact on the sentencing.

They argue that the court accepted evidence, without complying with the rules of evidence, which include the evidence of the GPS’s and computers, which were not sufficiently sealed and clearly showed the use thereof after being seized by the police.  It was being held without any control and at any time available to the state and police. 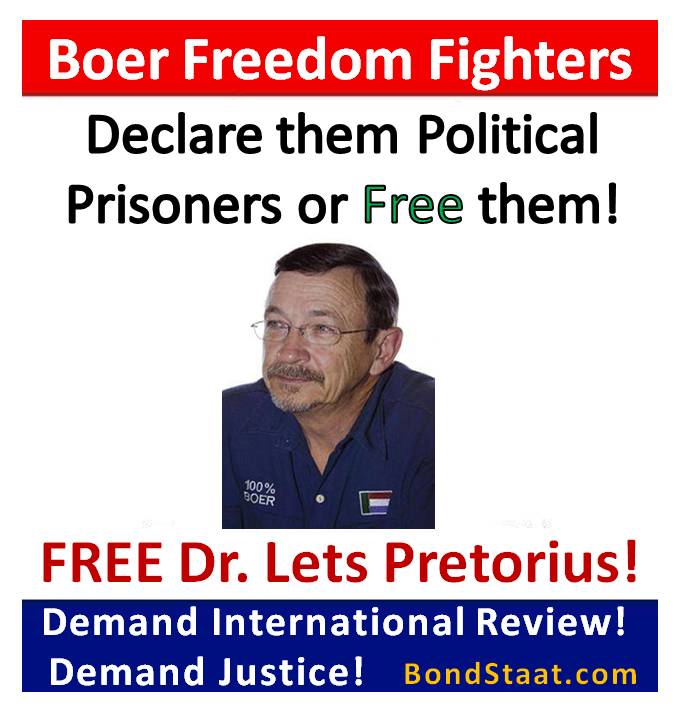 Regarding the sentence they argue that it was shocking and that the judge’s remark that he took into account that they were incarcerated for 11 years, were purely lip-service.  The court declared them unrehabilitatable on account of the states’ statement, without any prove to the effect.  The court never took into account that both brothers had studied during their incarceration and that Wilhelm Pretorius even attained several tertiary degrees.  Jordaan’s sentence was merciless and shocking, where he focused, apposing to international law, only on reprisal and punishment.  He sentenced them twice as long as the longest sentence ever been given in South Africa for the said deeds.  He never considered that they thought of themselves as soldiers in a just and legal war.  He aggravated their sentence on grounds of religious dogma and predictions without factual bases, and therefore acted unscientifically and non-judicial.

They argue that the judge should have regarded the old correctional law, by which the old correctional law stated that they would have been allegeable for parole after a third of their sentence and not after a half, as is stated by the new correctional law.  He therefor violated their right to the least severe punishment.  The judge should have regarded their 5 years for culpable homicide and 8 years for conspiracy to attempt to commit a crime as time served.  As it is, the 11 years are included with the effect that they are serving effectively 16 years for culpable homicide and 18 years for conspiracy of attempt to commit a crime and 46 years for high treason.  It means that in effect they have to serve 23 ½ years of an effective 25 years, before they would be allegeable for parole for the first time.  It is inhumane and out of proportion.

They ask for leave to appeal against their verdict and sentence and add that should it be denied, it would be a breach of South Africa’s international duties and would also be unconstitutional, because it would violate their right to appeal. 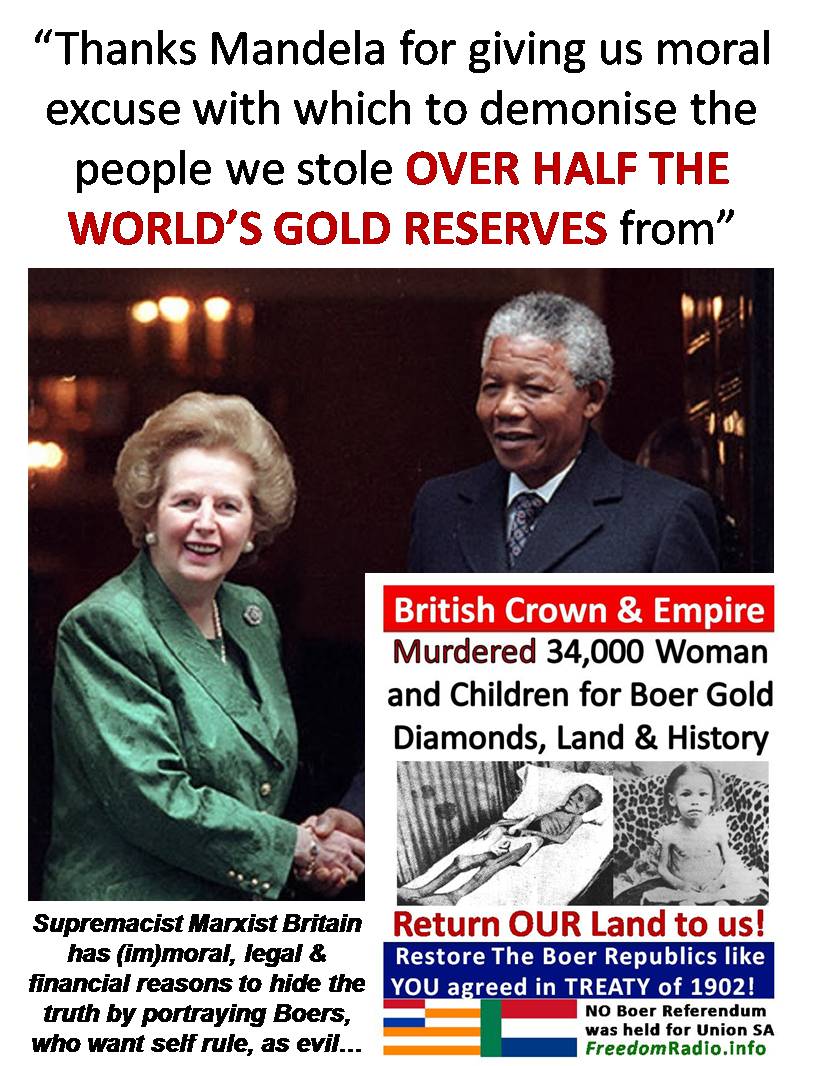