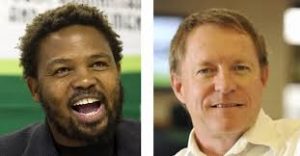 Mngxitama continues to spread false figures claiming 35‚000 white people in SA own 85% of the land: ‘They cannot fill a stadium’

He said land was stolen by whites and that land must be returned to its rightful black owners.

Mngxitama was speaking at the Rumble in the Urban Jungle debate hosted by the Cape Chamber of Commerce and Industry in Cape Town. He was debating with economist Dawie Roodt.

“In SA‚ if we were to look at just two sectors‚ agriculture and mining‚ we argue that because of the inefficiency of those sectors … you will still have to radically redistribute those sectors.”

Mngxitama said the value of mining in SA was about R20-trillion in terms of the known mineral resources‚ but mining only employed 400‚000 people. “That is highly inefficient. Only for that reason you should be redistributing that economic sector‚” he said

He said agriculture did not provide more than 700‚000 jobs.

“For these two reasons‚ both historical redress and even for economic reasons‚ you will actually do land expropriation without compensation‚” Mngxitama said. He warned that a land war was inevitable in SA.

Roodt said farms were not the place where wealth creation happened in a modern economy. “People do not want farms. People want to stay in cities‚ where they can have proper and decent jobs. We are not going to break agricultural land into millions of small pieces and settle millions of small farmers in SA‚” he said.

The land issue is the subject of the Cape Chamber of Commerce & Industry’s next Rumble in the Urban Jungle, being held on Tuesday, November 6, at the Cape Sun – an event that will be live-streamed right here on BusinessLIVE from 8pm.

The two prizefighters in this contest, which is fired up by Nando’s, will be Andile Mngxitama, leader of Black First Land First, and Dawie Roodt, Efficient Group chief economist.

The bout will take place over two rounds while invited guests enjoy their dinner at the Cape Sun. Thereafter will follow a question-and-answer session with the audience.

Land ownership and the expropriation of land without compensation has been at the centre of public debate for nearly a year. Most of the discussion has been at a fairly academic level, and the chamber felt it was time to go back to the basics and lay bare the facts and emotions at play.

Expect a lively debate: although anyone showing abusive or aggressive behaviour will be ejected by security, some of the debate may not be for the squeamish or politically correct, the chamber warned.