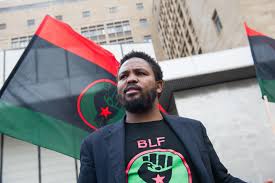 BlackLandFirst’s leader Andile Mngxitame demands  that all land in whites hands must be transferred into blacks hands.

The radical political leader of the BLF, Andile Mngxitama (photo) made  these demands  during the constitutional committee’s session in parliament.

According to him, “all land, used, unused, productive and unproductive land should be handed over to blacks, including Orania.

Christo van der Rheede of AgriSA acknowledges the humiliation, pain and economic suffering caused by previous policies and is therefore in favour of land reform.

Farmers are becoming increasingly impatient with Agri SA’s repeated crawling and apologizing for alleged injustices of the past.

The original article can be read in Afrikaans on Die Vryburger/