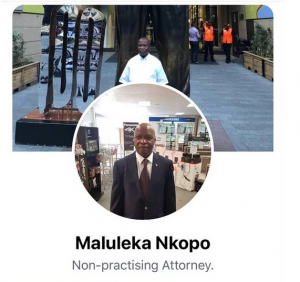 Cape Town non-practicing lawyer Maluleka Nkopo faces charges of racism and hate speech after he whipped up a storm on social media on Wednesday with his facebook entry that a white woman should be raped in front of her husband and killed afterwards.

This was after Nkopo wrote on Facebook earlier in the day: “How do you kiss a white ass? If you rape an elderly white woman in front of her husband and then kill them both. ”

DA councilor of the Mangaung Metro in Bloemfontein, Zaandré Campher laid charges of racism and hate speech against Nkopo at the Human Rights Commision. Campher says he believes such statements stir up hatred. People seem to think they can say anything on Facebook. Nkopo WHO describes himself as a non-practicing lawyer in Cape Town, wrote back by saying he “regretted” that his “sarcasm was misunderstood” and that it was giving the wrong impression.

According to Campher, it’s time for people like Nkopo to get caught because if the wrong person reads this stuff and does exactly what he says it should be done, other people’s lives are ruined. Campher says Nkopo’s entry was reckless and not in the spirit of the rainbow nation to unite people in a democracy.