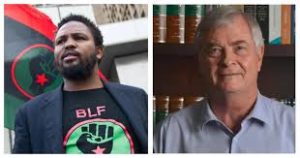 The Electoral Court in Johannesburg brought two warring parties face-to-face on Monday, as Black First Land First (BLF) and Freedom Front Plus (FF+) fought their cases diligently. Both parties have claimed victory in their duel, but can we really take anyone’s word for it?

BLF vs FF+: What did the courts say?
The BLF – known for their bombastic brand of rhetoric – were jubilant after the proceedings, claiming the judge’s decision was a vindication of their “black-only” membership policy. The FF+ have declared their position unconstitutional, and want their political nemesis banned from the 2019 Elections.

The court decided on Monday afternoon that the Independent Electoral Commission (IEC) should not have dismissed FF+’s appeal straight away. They have set aside that decision, meaning that the Chief Electoral Officer of the Commission must now make a decision on the matter “imminently”.

Can you vote for the BLF in the 2019 Elections?
As it stands, BLF remains on the ballot paper for the 2019 Elections. But that’s all subject to a review from the IEC, who also failed to publish the party’s registration for the election in the Government Gazette. This is why BLF leader Andile Mngxitama is claiming victory, although the FF+ also feel this is a vindication on their part, too.

“The Electoral Court in Johannesburg has given the FF Plus a say over the Electoral Commission’s failure to comply with the legal prescriptions with the BLF’s registration and instructed it to do so. They also ruled that the commission acted unlawfully by not hearing the FF Plus’ appeal on the registration of the BLF.”

FF+ Statement
If this was a football score, we could probably settle this one at 1-1 for now. But if the BLF were the referee here, they’d be giving themselves a 3-0 victory. In their own colourful statement issued this afternoon, the party made references to previous attempts at getting them barred from next week’s elections:

“The court instructed the IEC to publish BLF’s registration as a political party and BLF will be on the ballot on the 8th of May 2019.”

“The electoral ballot paper will see BLF listed as number 11. A number that represents the great footballer “Scara” Ngobese (RIP). Today we made it 3-0 against the racists, a hat-trick that the black Jesus would be proud of.”

BLF Statement
There’d be no handshakes at the end of this match, however. In fact, there’s likely to be a period of extra-time at some point in the future. The BLF may have just run the clock down enough to squeeze onto the ballot next week, but their participation in the elections could be disallowed upon review… Who needs VAR when you’ve got the IEC?