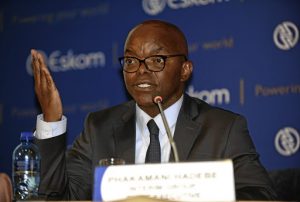 Eskom is looking for a new CEO after the current incumbent Phakamani Hadebe resigned after less than a year due to stress. His predecessors either left their jobs due to personal reasons, were dismissed or went away under a cloud of corruption.

Energy expert Ted Blom believes that Hadebe’s resignation did not come as a surprise because he came in as an outsider and although with good management experience, he had little knowledge of the power supply industry. Therefore, he was not readily accepted by the Eskom establishment.

Hadebe was appointed in 2018 to convalesce the struggling state entity after his success in improving the situation at the Land Bank. However, Eskom is a very difficult horse to stride, because the power provider is currently not selling enough electricity to cover its interest payments and huge running costs. This stems directly from a legacy of years of mismanagement and overall costs on new plants, which resulted in a current debt of at least R440 billion.

Anyone having the guts to get into the Eskom sadle? For the sake of the whole of South Africa, Eskom has to succeed!

The obvious way out is rather to deregulate and unbundle the power supply industry in SA and give the renewable energy sector the chance to spontaneously emerge. In addition, the people of the country should radically “green” in their lifestyle.

The one big challenge in this regard is affordable solar power. How do South Africans respond to this?

– Read the original article in Afrikaans on Ditsem Nuus
This report does not necessarily reflects the opinion of SA-news.