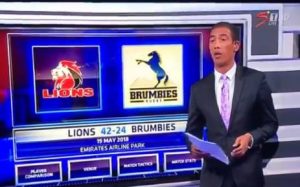 SuperSport CEO Gideon Khobane says Advocate Vincent Maleka has found that there was no racism involved in Ashwin Willemse walking out from an on-air broadcast.

Multichoice CEO Calvo Mawela and Khobane are addressing the media on Tuesday.

“The conduct between Naas and Nick during the off-air conversation with Ashwin and during the live studio broadcast of the post-match commentary of the match does not manifest naked racism and was not motivated by racist considerations.”

Willemse walked off a live broadcast last month after the Lions’ 42-24 win over the Brumbies, saying that he would not be patronised and couldn’t work with Nick Mallett and Naas Botha who played rugby during the apartheid segregated era.

Khobane says Willemse did not participate in the inquiry.

“Ashwin Willemse regrettably decided not to participate in the review even though all parties involved were advised of the process before it started and raised no objections at the time.”

However, it was found that Botha and Mallet were not racist.

“There was also no evidence of Naas or Nick exacerbating either intended or unintended subtle racism.”

Khobane says there was limited time during the break and it was decided that Willemse should be the first to speak.

“The panel then agreed off-air that Ashwin will be given the first opportunity to speak after the game. It is reasonable to assume that Ashwin may have regarded the common stance adopted by Nick and Naas as patronising when they insisted that he should thereafter speak first.”

Mallet and Botha are set to return to duty soon.