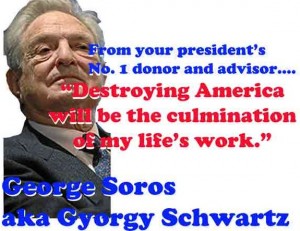 Are White People the Stupidest People on Earth? World Supremacist George Soros is investing $500 Million in migrants to replace whites in their own countries and take over their entire economies, and stands to make TRILLIONS! He has done it before to the British Pound. Soros has turned ethnic cleansing and invasion of Nation States into a business, and Europe and America seem blissfully unaware!

The world supremacist destroyer of nations, George Soros recently published a letter in the Wall Street Journal entitled, ‘Why I’m Investing 500 million USD in Migrants’. In this article, I will be looking at that letter and separating what it means from what it appears to say.

Soros’ letter begins: “The world has been unsettled by a surge in forced migration. Tens of millions of people are on the move, fleeing their home countries in search of a better life abroad. Some are escaping civil war or an oppressive regime; others are forced out by extreme poverty, lured by the possibility of economic advancement for themselves and their families.”

This is only true because Soros should know, since his think tank is fully on board secretly manipulating that “forced migration”. He has either initiated it or facilitated it and, according to Viktor Orban, Prime Minister of Hungary (which is presently holding a referendum on whether to accept migrant quotas as demanded by the EU), as quoted by Bloomberg: “His name is perhaps the strongest example of those who support anything that weakens Nation States, they support everything that changes the traditional European lifestyle […] These far left “Refugees Welcome” extremists who Soros pays to support immigrants inadvertently become part of this international human-smuggling network.”

Soros-paid Far Left exremists are at the center of that network.

Soros continues: “Our collective failure to develop and implement effective policies to handle the increased flow has contributed greatly to human misery and political instability—both in countries people are fleeing and in the countries that host them, willingly or not. Migrants are often forced into lives of idle despair, while host countries fail to reap the benefit that greater integration could bring.”

I have touched on Soros’ psychological peculiarities elsewhere; his narcissistic traits notwithstanding, I shall assume he is not using the royal “we”. That granted, about whom is he speaking when he talks of “Our collective failure to develop and implement effective policies”? If about governments, we should remember that he is NOT elected to any nation’s government, nor has he ever been.

That does not prevent him, however, from meddling in their internal affairs and supporting insurrections such as false Color Revolutions, including in Georgia and Ukraine, and whipping up chaos via BLM in the US.

He also famously attacked the British pound, making himself a billion dollars.

He wishes the reader to assume inclusion by his use of “our”. But we are victims and not included; we are simply being told what is to happen.

He then writes of “the “proven” benefit that greater integration could bring”. This is almost a rhetorical conundrum; he and his lawyers expect – not without reason – that most people will provide their own color to what the words on the page say. He claims proof but provides none – and that is a major omission given that we are expected to entrust our entire genetic and cultural heritage and economic future to his assertions.

Many countries, including Japan, China, UAE, Israel and Singapore, are extremely careful to whom they grant citizenship and are wary of Far Left world supremacists. If the benefits Soros claims were proven, surely they would be on board, too?

To continue: “Governments must play the leading role in addressing this crisis by creating and sustaining adequate physical and social infrastructure for migrants and refugees. But harnessing the power of the private sector is also critical.

Recognizing this, the Obama administration recently launched a “Call to Action” asking U.S. companies to play a bigger role in meeting the challenges posed by forced migration. Today, private-sector leaders are assembling at the United Nations to make concrete commitments to help solve the problem.”

And people thought the SA-News article about World Supremacists gathering at UN was a red herring? Read it here:

World Supremacists Gather at United Nations to plot Final Solution for Global Domination and destruction of all nations, all cultures, all religions, all races into one!

Soros, naturally, does not blush at telling us what our governments, his paid lackeys, “must” do.

The term “forced migration” is a clever mind hook. You may be sure that it was worked on for hours and many alternatives discarded. Its power lies in the fact that it implies both helplessness in the face of an unstoppable external force and inevitability of result – while at the same time disregarding causes. The well known self fulfilling prophecy trick Hollywood uses so often…

If anyone still cares, the causes include: attacks by the US and Nato on countries which have done them no harm; Angela Merkel’s open invitation to the third world to move to Europe; financial, material and informational support from Soros-funded organizations.

Soros gloatingly continues: “In response, I have decided to earmark $500 million for investments that specifically address the needs of migrants, refugees and host communities. I will invest in startups, established companies, social-impact initiatives and businesses founded by migrants and refugees themselves. Although my main concern is to help migrants and refugees arriving in Europe, I will be looking for good investment ideas that will benefit migrants all over the world.”

Let’s translate what he means: “Now that the forced inflow of immigrants has been set up, I am going to invest $500 million to make the process unstoppable, endless and self-funding, and make a lot of money for myself at the same time. And since this is dressed in the language of compassion, there is nothing you can say against it. I am going to make a killing replacing the populations, and taking ownership of the economies of Nation states”

Back to Soros’ letter: “This commitment of investment equity will complement the philanthropic contributions my foundations have made to address forced migration, a problem we have been working on globally for decades and to which we have dedicated significant financial resources.”

Just remove the words ‘philanthropic’ (which does not mean at the elite level what you think it means) and realize that ‘address’ means ‘facilitate’ or “manipulate” to Soros, and you will understand this sentence correctly; this is a carefully crafted statement of policy.

He continues: “I will offer investments in a variety of sectors, among them emerging digital technology, which seems especially promising as a way to provide solutions to the particular problems that dislocated people often face. Advances in this sector can help people gain access more efficiently to government, legal, financial and health services. Private businesses are already investing billions of dollars to develop such services for non-migrant communities.

This is why money now moves instantaneously from one mobile wallet to another, drivers find customers by using only a cellphone…

All of the investments we make will be owned by my nonprofit organization. They are intended to be successful—because I want to show how private capital can play a constructive role helping migrants—and any profits will go to fund programs at the Open Society Foundations, including programs that benefit migrants and refugees.”

Thus, any migrant who wishes to will be able to plug into the support system you and your families have been paying into all your lives and access its main arteries with nothing more than a mobile phone. Soros, meanwhile, makes a load more money which he can then plough back into the very organizations which will make sure the inflow of migrants never stops. Pure evil invasion and supremacy.

Soros goes on to claim: “As longtime champions of civil society, we will be focused on ensuring that our investments lead to products and services that truly benefit migrants.”

Leaving what Soros may mean by ‘civil society’, I turn to his use of ‘benefit’; benefit according to whom? According to George Soros – a man who destabilizes sovereign states as part of his modus operandi.

Soros concludes: “We will also work closely with organizations such as the Office of the United Nations High Commissioner for Refugees and the International Rescue Committee to establish principles to guide our investments. Our goal is to harness, for public good, the innovations that only the private sector can provide”

What this means in English is: “The fix is in, and now all you smaller fish further down the food chain can make a nice buck off the gravy train of selling your countries out because if this weren’t a sure thing, I wouldn’t be in it.” 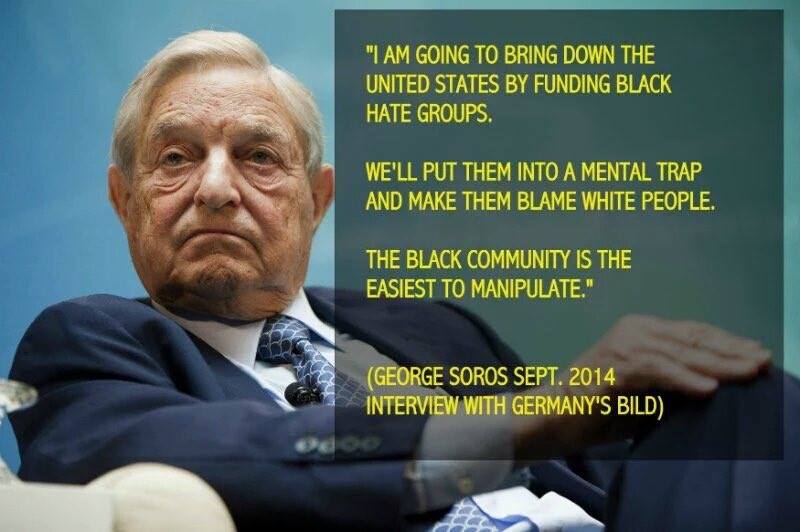 This is cultural- and ethnic-cleansing in a business suit; it is the de facto usurpation of the nation state as a social construct for the peoples of Europe as part of a multi-purpose war – one designed to destroy oil-rich states and any state with no central bank, while simultaneously collapsing sovereign states.

Although with the inevitable, eventual annihilation of the middle class in Soros’ “host countries” there will be nowhere for genuine refugees to go; it is that we have taxation without even the fig leaf of representation so long as men like Soros can openly create and dictate policy. 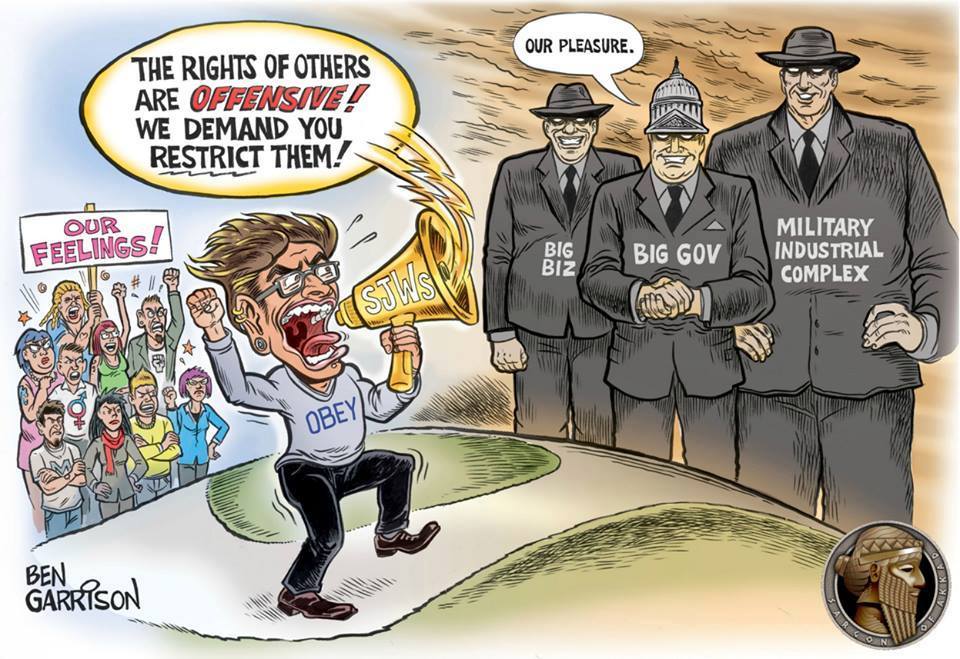