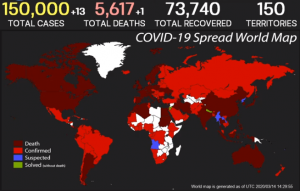 As the world hits 150,000 infections globally, “Black Twitter” as it is known in SA, is spreading the myth that black people do not get Coronavirus! At the same time, one of the glaring things to come out of the surprisingly few coronavirus cases in South Africa, is that no infections were exported from China to SA? This despite there being multiple times more people coming from China to SA than Italy, yet it is Europe that the ANC seems intent on blaming for its Coronavirus infections.

In fact an SABC “executive producer” with a long title, made an entire report, with fancy graphics, about all Africa’s infections coming from Europe, even though there are over a million Chinese workers in Africa! However the Twitterati and WHO had a heart attack when people called it the “ChineseCorona” virus, even though that is where it started, but it is ok to point fingers at Europe? WHO was also very happy to announce that the virus’ focus has now moved to Europe! Ironically, it is in Europe that a famous black footballer contracted the virus, but “black Twitter” ignores that. Then of course it is more likely a european person will be more aware of the need and be responsible enough to come forward, when they suspect they have the virus, any Chinese person would have a deep seated fear of authority from the Communist regime and would also distrust the ANC incompetence, so would probably quietly try deal with it themselves, as we saw in so many cases in Wuhan, where many just quietly locked themselves up in their apartments. A black person will no doubt go consult a witch doctor, because the ANC has not yet offered money or free stuff, like in Communist China where people were offered rewards for reporting neighbors or family with infections!

For South Africa with a population exceeding 60 Million, to only have 38 cases despite not having implemented ANY counter measure or quarantines or banning of flights, is simply not logical. In fact we suspect, one of the ANC’s favourite pastimes has come to the fore again – that of deliberately misdiagnosing the cause of death! There have been cases of fatal swine flu reported, all conveniently ignored by the mainstream media. Swine flu is from a similar family as the coronavirus COVID-19 so an easy enough “mistake”? This is important as the death rate can be used to roughly calculate the infection rate as was outlined here. We suspect SA has at least 1,000 cases by now. Most countries have now removed the geographical travel criteria for testing, has SA done this yet?

As the ANC and its complicit cohort of concubine mainstream media pat themselves on the back, for returning a plane load of South Africans from China, who have been in quarantine there for 2 months, and are thus very safe (for Cyril Ramaphosa to use as a publicity stunt), we wonder what ANC had to promise the Conmunist Party in China for permission to extricate its citizens?

The military plane (was SAA not safe enough?), transporting over 140 – SA citizens repatriated from China, landed today at Gateway International Airport in Polokwane. The group also including volunteers and SANDF officials were transported by road to The Ranch Hotel in Polokwane (dare we ask who owns it?), where they’ll be quarantined for 21-days, which is a bit pointless given that they were already quarantined for a lengthy time in China and there are no checks for normal people coming from China anyway at airports!

Why quarantine them if anyone can come from China and just walk right into the country? Except of course to propagate and exaggerate the Ramaphosa publicity stunt. As we saw and know in Communist China, the Supreme Leader’s image is the most important thing. This is also a handy opportunity to give them a free holiday for a month, in return for votes, whilst the virus no doubt spreads unhindered through the country, like a virus does. The coming days and weeks will be very telling, but sadly, people will still vote ANC, because white people are the bad guys you know.

When the crisis strikes, as it surely will, there will literally be a wailing which will soon be followed by the predictable demands for more free stuff, like free flights from China…

See also: Why South Africa Should Be Banning Flights From China NOW, Like Many Other Nations Have &#8211; Non Severe Cases ARE Infectious!