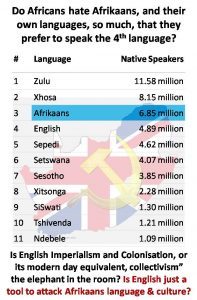 Metcalfe is also blindly ethnocentric, judging from the zeal with which she argues the case for ramming even more English down our throats. What she calls a “legal war of attrition” over the Afrikaans schools is, more fundamentally, a prolongation of the Anglo-Boer wars and the quest for total English supremacy and monoculture.

In many societies, such attempts at cultural and political domination of one group over another have led not to legal bellicosity, but to more literal war and ethnic conflict. Metcalfe refers to “challenges of perception”, among which is the “perception” (of white liberals with children in ­private English schools?) “that language exclusion operates as a proxy for racial exclusion”.

Before we argue about perceptions, there is a reality that Afrikaners are, by and large, politically and culturally excluded from the current system that is run by ex-terrorists, ­former exiles and an Anglomaniac elite that takes its own colonial Anglo-American or even Afro-American culture as a given. McDonald’s and KFC are in; boerewors and biltong are out.

The operative term here, and which Metcalfe in her Anglomaniac self-righteousness uses quite freely, is “imposition”: “the imposition of English as a parallel medium of instruction in Afrikaans-medium schools”. By what right do Metcalfe, Barbara Creecy and their puppet, Panyaza Lesufi, want to “impose” their killer language on us? English enjoys unheard-of dominance, funding (also by the Afrikaans taxpayer, who is financing English imperialism) and exclusive privilege on all levels of government, yet this is apparently not enough. The Afrikaans school must be stifled, given its final solution – all in the name of “diversity”, that nauseatingly politically correct concept. There are ­thousands of all-black schools all over South Africa without any white children, yet no one is bemoaning their “lack of diversity”.

It follows that the assault on Afrikaans schools has nothing to do with improving education, but more with the ethnic hatred of Afrikaners in some Anglophone, cultural-Marxist circles whose covert objective is not only to eradicate the Afrikaans language but also to rid the country of Afrikaners. Either we will be made to feel so unwelcome and hated that we will simply emigrate or there will be some more violent solution to the “Afrikaner problem”.

If the remaining 124 Afrikaans schools in Gauteng succumb to English political fanaticism, the country will lose many young engineers and scientists, further hastening its current decline. But those schools have a wider function too: in a violent, decadent society that is hostile to cultural minorities, they care for our children.

Afrikaans schools manage to give children from single-parent, lower-middle-class homes a chance in life. They also represent the last havens of Afrikaans culture menaced by an Anglocentric state and corporate behemoths constantly imposing their monoculture on everyone.

It is not true that “from 1994, many historically Afrikaans schools have opted to offer parallel streams of English and Afrikaans in one school”. In all the cases I know of, there was some degree of threat or coercion from the provincial education department concerned.

The notion that Afrikaans schools “belong” to the state and not to the community that created them must also be challenged. Metcalfe and education MEC Lesufi are the landlords of public schools, lording it over their hapless tenants as they see fit. Most Afrikaans schools in Gauteng were financed by Afrikaner taxes and are maintained as semi-private institutions by fee-paying parents, often grappling with financial problems.

Ever since the British took control of South Africa in 1806, there has been a Dutch and Afrikaans ‘taalstryd’ (language struggle), perhaps interrupted by 40 years of National Party rule, during which an Afrikaner government did not dare to force English schools to become Afrikaans medium.

After two centuries of language struggle, the very existence of Afrikaans and Afrikaans schools is still under threat from a hostile, fundamentalist, Anglomaniac government that makes British colonialists look tame by comparison.