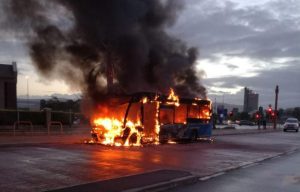 Vandalism and arson attacks on the MyCiti bus service have cost the City of Cape Town R10 million.

This is according to an EWN report, which cites statements issued by City of Cape Town official Luthando Tyalibongo. The representative also confirmed that, as a result of a recent wave of arson attacks on MyCiti buses, the City would be deploying law enforcement officials to safeguard infrastructure and commuters.

MyCiti bus service struggles
The last two months have been particularly daunting for the MyCiti bus service. An unprotected strike which was initiated last month disrupted services across the metro. Protest action led to driver intimidation, assaults and damage to infrastructure.

As a result, the City of Cape Town was granted a court interdict against protesting drivers, prohibiting the disgruntled employees from gathering near MyCiti depots or busses. On separate occasions, law enforcement officers were forced to disperse crowds, leading to the arrest of at least five dissatisfied drivers.

Busses burn in Milnerton and Khayelitsha
Two MyCiti buses were set alight this week, causing further transport delays around the metro – especially in the affected areas. On Tuesday morning, a MyCiti bus stationed at the Omuramba stop in Milnerton went up in flames. On Wednesday, another bus fell victim to an arson attack near Kuyasa station in Khayelitsha.

“For safety and security, we’ll deploy staff from law enforcement, metro police and traffic to provide escort duties of the MyCiTi buses as the city cannot afford to lose buses critical to the public transport network.”

The Western Cape government’s standing committee on Transport and Public Works, represented by chairperson Nceba Hinana, has described the attacks as clear acts of sabotage, saying:

“The South African Police Service must speedily get to the bottom of this. Acts of arson on state resources and infrastructure are catalogued under sabotage. It should be taken in a very serious light and result in harsh sentences.”