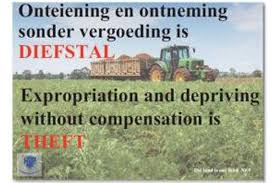 The process to amend section 25 of the Constitution in order to fast-track expropriation without compensation suddenly gathered speed on Tuesday when a draft bill to amend the Constitution was tabled by the parliamentary legal services.

The Constitution Eighteenth Amendment Bill was tabled at a sitting of the ad hoc committee tasked with amending the Constitution.

This first bite at the wording of the constitutional amendment states that when the state and the land owner cannot agree on the price to be paid, a country may – where land and any improvements thereon are expropriated for the purposes of land reform – determine that the amount of compensation is nil.

Parliamentary legal services furthermore proposed inclusion of a section which requires national legislation to set out specific circumstances where a court may determine that the amount of compensation is nil.

The draft bill does not delete any part of the Constitution, but adds to it, meaning that the amount paid for expropriated land is either agreed between the owner and the state, or is decided by a court.

The DA and FF Plus immediately objected that the circumstances under which expropriation without compensation would occur, will in effect be decided by national legislation, which only requires a threshold of 50% parliamentary support – not two-thirds as a constitutional amendment does.

The ANC and EFF then accused the DA and FF Plus of wanting to drag their feet, and ANC MP and committee chairperson Dr Mathole Motshekga added a proposal that the court should no longer determine the amount to be paid out in cases of a dispute, leaving the courts only with the power of review, which it has in any case.

Again, the DA and FF Plus raised their strong opposition to the weakening of the court’s role, but initial indications were that the ANC and EFF were quite positive about Motshekga’s proposal – the ANC more so than the EFF.

ANC MPs, in fact, started talking about creating a tribunal rather than using a court to be the arbiter on expropriation payment, but that discussion was nipped in the bud and the meeting adjourned until Thursday.

Earlier, the committee had to deal with a letter by farmers’ organisation AgriSA, which asked that the draft bill not be published in the Government Gazette over the festive season because it would inhibit public participation.

After discussion, Motshekga ruled that the bill could indeed be published in the Government Gazette as tyhere would be more than enough time (until the third week of the new year) for public comment.

The committee will meet again on Thursday to deliberate on the bill.