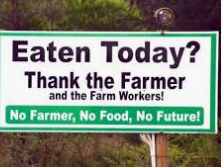 With every passing day that the ANC’s wishes to deny that farm attacks and murders are a reality, farmers will continue to be murdered. The murder of Sakkie and Ina van der Berg on their farm in the Boshoff, Dealesville district this past weekend has been proven that farm murders in South Africa are out of control.

According to the Transvaal Agricultural Union (TAU) figures, there were over 60 farm murders and 217 farm attacks only in the first half of 2019.

Neither President, Cyril Ramaphosa, nor the Free State Prime Minister, Sisi Ntombela, wanted to acknowledge in their recent state and provincial opening address that the government’s lack of rural security poses a threat to farmers’ safety and food security.

The ANC focuses on gang violence and deploys the army to defuse it, but ignores farmers’ plea to also secure their security. The ANC prefers to focus on the past and create the perception that farmers are crooks who have stolen land.

It is a dangerous message that compromises farmers’ safety. South Africa will remain a nest of farm attacks and murders if the ANC continues to blame farmers for its failures.

The FF Plus, will in the coming week, in the Free State legislature during the debate on the Department of Police, Roads and Transport demand that the department request police minister, Bheki Cele, to make additional resources available to establish rural security units in the province .

The Free State Government, with such a request, can ensure the safety of farmers, as the police minister said in his budget last week that he wants to focus on specialized, intelligence-driven policing.

The FF Plus will continue to strike back against farm murders and attacks and once again call on rural communities to organize themselves and strengthen their security measures.

– Read the original article in Afrikaans by on FF Plus / 2019-07-15
This report does not necessarily reflects the opinion of SA-news.