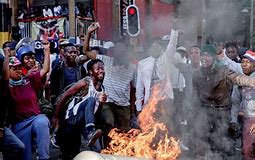 In 2007, after nearly four years of economic growth of over 5%, Sasria received 540 claims worth R14 million for damage as a result of violent protests. Most of those claims were related to labour action.

By 2018 the number of claims had spiked more than 10 times, to 5,543 claims. But the increase in the value of the claims was a hundredfold, to R1.4 billion. Most of those claims were related to service-delivery protests, pointing to a failure of local government.

Protests and road closures have become a daily occurrence across South Africa as marginalised communities take to the street in the belief that they only get noticed when causing damage to public and private property.

There is also a worrying rise in sabotage, with a large number of claims last year related to the torching and looting of big trucks.

Government started Sasria in 1979 amidst growing political tension in South Africa, when commercial insurers were no longer prepared to take the risk of covering the mounting damage to property caused during political protest action.

The state was forced to step in and created Sasria as a Section 21, not-for-profit company. It started to generate surpluses and was later converted to a state-owned company.

You might have seen a small “Sasria” cost on your insurance policy and it will generally come in at under R5 a month. It’s there in the event that you find yourself caught up in “civil commotion, public disorder, strikes, riots or terrorism”.

Sasria is warning its premiums may need to increase to cover the rising risk of insuring against those events amidst a rising tide of discontent. Last year that pushed the insurer into a loss for the first time in its history.

Over the past five years Sasria has processed 16,000 claims worth a combined R4.6 billion. It is concerned that without an improvement in social conditions, that number is set to rise.

That is a warning the state needs to heed.

Bruce Whitfield is a multi-platform award-winning financial journalist and broadcaster.