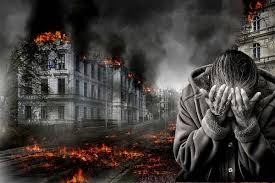 The extremely dire situation in which South Africa finds itself has raised the question of whether it is not yet time to make a survey of everything that has been destroyed in 25 years.

A political analyst points out that the first red light came on when municipalities across the country, all of which had cash stashed  up over years, suddenly turned red in the face of bankers.

Today, there is probably not one municipality that is either totally bankrupt, or hesitates on the brink of bankruptcy.

The debt burden of billions of rand in municipal structures is one of the surest ways that South Africa will look just like Zimbabwe in the foreseeable future – tar roads become dust roads, light fires sometimes, and businesses close their doors, one sooner than the other.

The government is in the same position – the latest shock is that the government has failed to raise R2bn so that the bankrupt SAA can resume its flights.

SAA is bankrupt, Eskom’s R450 billion debt burden is bankrupt, Denel hesitates in the abyss, Prasa rail service, Land Bank is the latest addition to the bankruptcy gallery, and so every government department’s poor functioning equals ineffective military and police, while hospitals have turned into holes to pick up diseases instead of being healed.

Of course, there is still a long queue to add to the list, but more time and writing is needed.