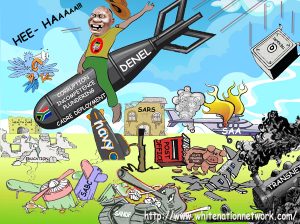 The ANC government is drowning in debt, and its domestic debt burden is a disgrace that is inexcusable but also remains unacceptable.

The state owes businessmen in the country more than R7bn, and the foreign debt burden causes the country to receive junk status.

Gauteng is believed to be the biggest offender with a debt burden of R2,6bn that is older than 30 days and payable to businesses.

Concerns exist over the fact that several businesses have already closed their doors due to the state’s defaulting on debt.

The debt burden placed on state-controlled entities (SOE’s), such as Eskom, Denel, SAA and many others, is also a concern, while foreign debt is high that South Africa pays melons Rand interest every year.

With the decline in gold production, which is normally used as a means of payment, the ability to pay decreases, while illegal gold diggers deepen billions of Rand’s gold from old mines and trade on the black market.

The decline in gold production is attributed to the unions’ constant demands for higher wages, which later make mining unaffordable and a non-paying industry.