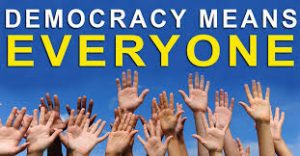 The ANC has not just messed up the foundations of our democracy. It has also committed an arguably worse moral sin: contributing significantly to reduced levels of humanity and public trust in the citizens of our beloved country.

I have the awkward but enormous pleasure and privilege of framing and facilitating sharp debate on radio on weekdays on 702 and Cape Talk. Radio is conducive to authenticity like no other medium.

It is inevitable that deep disagreement about how we see the state of our society, and our place in this world, will be reflected in the conversations that occur between my listeners, and the guests we invite on to the platform.

My sole obligation is to treat everyone with dignity. It is not to soothe feelings or affirm the cherished beliefs and convictions many of us have never interrogated or which we have come to expect our preferred media to prop up.

This sets up the most unpredictable daily conversations, especially on the open-line segment, which kickstarts my three-hour show.

On Monday, something unexpected happened on my open line that caught my producers off-guard. It also caught me off-guard.

Listeners — in other words the public — were strongly united, regardless of race, gender, political affiliation or which part of the country they were calling from. This is rare. Emotions were running high. They were, to put it bluntly, unanimously pissed off.

What triggered this rare collective anger and willingness to put familiar differences aside to unite on a shared viewpoint? The person they were skewering was the ANC’s Jackson Mthembu.

The day before, the Sunday Times had carried the story of Mthembu thinking seriously of exiting politics next year. He has been a career politician for most of his life and it has had many negative consequences for his family, consequences that are clearly haunting him into the final stretch of his stay here on Earth.

Marital life has been ruinous for him. A son has succumbed to addiction and is now in jail. Mthembu is clearly grappling with his demons and the choices he has made in life, and he evidently wants to make amends with his family for his long absence.

In a very profound way, in my view, Mthembu is really coming to terms, even if he is not using this wording, with how broken the ANC is as an alternative family structure. Many politicians experience political parties, especially ones with deep-seated liberation movement identities, as a kind of familial place, which, though not wholly compensating for the psychosocial loss of actual family life, offers some psychic and social gains.

The ANC today, however, is not what it used to be. It is broken. It cannot be mended easily, if at all. It is a source of existential pain for someone like Jackson. That sparks a longing to now find intimacy in a social unit he has neglected for a long time — his wife, children, uncles, aunts, siblings and cousins.

My radio listeners hated him for expressing these feelings and thoughts. They were extremely angry. They see it as a pathetic attempt to avoid moral and political responsibility for his role in the ruin of the foundations of our demo-cracy. They interpret it all as a feeble attempt to be let off the hook, a case of seeking sympathy rather than accounting for political ineptitude as a senior leader of the governing ANC.

Men and women, residents from townships and the suburbs, black people and white people, all agreed that he should be ashamed of himself.

That was the crux of my Monday open line on radio. It left me saddened, puzzled and, as an analyst, inevitably in search of meaning. I discussed it with a close friend.

We agreed on what is going on here. The ANC has squandered public trust so badly that citizens who gave it many chances to govern effectively and caringly are now gatvol.

Since public trust is so low, it breeds suspicion of the motives of an elected official when they tell us about their pain and their life story. As one black woman said to me: “Eusebius, I don’t care about Jackson Mthembu’s feelings. I want my country back!”

But I think it is not just public trust the ANC has obliterated, though my friend is right about that, sure.

Something worse has happened. Our capacity for empathy, our humanity, has slowly been eroded by a spent ANC that has made us cynical and unkind to each other, and has made us refuse to embrace elementary complexities such as distinguishing between political accountability and having enough humanity in us also to see politicians as beings capable of grappling with alcoholism, absentee fatherhood, being a bad husband and guilt-ridden feelings about domestic failure.

Mthembu should not be given a free pass as a senior ANC leader. But why are we letting this current crop of ANC leaders also destroy our moral psychology? We can simultaneously nail Mthembu for political agency badly exercised while also responding to him as a person in a way that is not reducible only to his role as a politician.

It will be hard to recover our humanity long after the ANC is voted out of power, so it should not be easily forgiven for facilitating our growing cynicism.