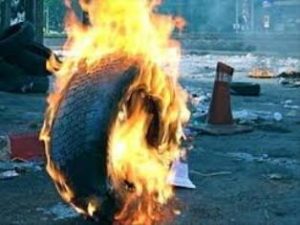 The residents of the Elias Motsoaledi squatter camp in Johannesburg apparently had enough and started protesting by making the only route to Lanseria International Airport impassable.

Burning tires, stones and bricks in the only route on Monday blocked the way to the airport, and vehicles that dared to face the barricades went under the residents’ stone throwing actions.

The squatter camp has apparently been without electricity for more than four months and this has made the residents decide enough is enough.

An Eskom spokeswoman said no power was allowed in places where illegal power cuts were made, which is the reason why the power was cut off.

The residents’ protest action later led to clashes with police, and out of anger one of the transformer cabinets was set on fire which delivered power to the squatter camp.