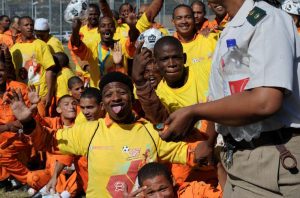 The grant proposal by the Department of Correctional Services is an innovative idea and should be taken seriously.

South Africa’s prison authorities have proposed paying unemployed ex-offenders a social grant for a transitional period after serving their sentences. The grant would provide thousands who re-enter society every year with some income while they try to put their lives back together.

Ex-offenders with a criminal record find it hard to reintegrate into society when they’re released. More often than not, they are returned to prison because they can’t make it on the outside. Most ex-offenders are stigmatised and find it impossible to find a job. Research on former prisoners shows that finding employment is perhaps the most daunting obstacle facing released ex-offenders in South Africa.

The grant proposal by the Department of Correctional Services is an innovative idea and should be taken seriously. But the department has met with a lot of opposition. Members of parliament from the country’s biggest parties have rejected it outright. Many argued that a grant would be equavalent to “rewarding” ex-offenders for their crimes.

The rejection of DCS’s proposal is a pity. My own research found that ex-offenders in South Africa suffer from being stigmatised and shamed. This has meant that all previous integration efforts have failed. Accepting the grant proposal would ease the transition and go some way to alleviating the problem.

Criminologists see the reintegration of returning ex-offenders as important to helping curb the tendency of criminals to re-offend. Reintegration strategies need to address the shame inherent in stigmatisation.

The Australian criminologist John Braithwaite made the valuable distinction between two kinds of societal responses to crime and, by extension, ex-offenders.

The first is a culture in which offenders are stigmatised and driven away from mainstream culture. Most Western countries (including the US and the UK, as well as South Africa) fall into this category.

In the second – what he called integrative shaming cultures – offenders are also shamed but once the punishment has run its course, they’re accepted back as a full member of that society. What’s notably absent from this response is stigma. China and Japan take this approach.

Research shows that in these cultures, recividism is much lower. Re-offending rates in China at the turn of the century stood at 6%-8% compared to 86%-94% in post-apartheid South Africa.

Based on Braithwaite’s insights it’s clear that in South Africa stigma drives ex-offenders into the arms of criminal subcultures. Given this, what should South Africa do?

South Africa’s runaway crime rates and unsustainable rates of re-offending are the direct result of the country’s inability to successfully integrate ex-offenders.

Given the prevailing culture it’s no surprise that past reintegration programmes have failed. As my research points out, cultures that stigmatise ex-offenders are by definition “selfish” and not “caring”. This makes reintegration close to impossible.

Every effort must be made to ease the impact of stigma, including the marginalisation and discrimination of ex-offenders.

Research in China found that ex-offenders in communities in which ‘bang-jiao’ (re-integration) neighbourhood committees are active are at least 50% less likely to re-offend than in areas without them. The mandate of ‘bang-jiao’ committees is to “assist and guide those who have misbehaved” and actively contribute to their constructive resettlement with warmth, love and acceptance.

In the US, research by criminologist Christopher Uggen and his group of co-workers has shown that ex-offenders are almost obsessed with rejoining society as responsible citizens. For the most part, however, their efforts are rebuffed.

If ex-offenders have served their time and have shown genuine remorse and a willingness to reform their ways, they should be lent a helping hand in making a renewed effort at living an honest and honourable life. This is not a plea to “reward” criminals. It’s about designing an intervention that encourages ex-offenders to get back on track.

And to stop any potential abuse of the system, the initiative should arguably be extended only to first time and elderly offenders.

If South Africa is serious about curbing the country’s unsustainably high and rising rate of recidivism, it should seriously consider sensible suggestions about integrating ex-offenders.

The proposal to provide newly released ex-offenders with some bridging income is one such idea.

Politicians should refrain from knee-jerk, politically expedient and for the most part ignorant reactions. Integration is a tall order in a country where ex-offenders are routinely stigmatised and shamed. This applies equally to the challenges that face both returning ex-offenders and the communities that have to absorb them.

Integration will remain a pipe dream unless a more broad-based approach – one that moves away from punitive stigma as the sole response to crime – is considered and implemented. But still, the elderly suffer, this ‘grant’ can be given to them, don’t you agree?