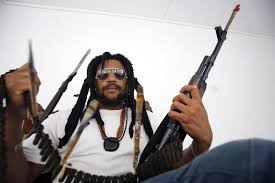 Ayanda Mabulu has taken some artistic liberties once again. After grossly depicting Zuma and Mandela, he’s changed tact with “blame it on the boer”.

Arguably the most controversial artist in South Africa – famous for depicting politicians in crude, graphic detail alongside swastikas – could be in hot water.

He unveiled his latest work “blame it on the boers” outside of the Johannesburg Stock Exchange this week.

Along with a row of pig’s heads and his trusty gun-with-a-paintbrush, Mabulu’s art caused scenes of chaos. He was ordered to remove the installation and warned not to return to the location or he could face arrest.

Authorities say the artist was not detained, but only cautioned for his behaviour. Anyway, we know details are great and all… But you want to see what exactly was on this painting, don’t you? It’s at this point we’d like to advise sensitive viewers to divert their attention elsewhere.

Ayanda Mabula: The “blame it on the boers” painting explained
On a red, white and black background covered in Nazi symbolism, two figures from South Africa’s colonial past feature. One is forcing a black slave to give him oral sex, whereas the other appears to be defecating. A young black child hangs from his feet, and the phrase “blame it on the boers” is emblazoned at the bottom.

We’re not really sure what the words are to describe Mabulu’s back-catalogue. His usual targets include famous politicians and historical figures. He once received an official rebuke from the Nelson Mandela Foundation for depicting the rape of Madiba, by Jacob Zuma. At some point, this sort of thing stops becoming art.

Who is this Ayanda Mabulu
Jacob Zuma is certainly one of his more favoured targets. In October 2017, he painted another unflinching sex scene involving Msholozi and Nkosazana Dlamini-Zuma.

Needless to say, senior ANC figures were mortified by Mabula’s painting. Ex-Spokesperson Zizi Kodwa labelled it as “an insult to South Africa’s collective morality”. He went on to ask the Sanef (South African National Editors’ Forum) to take action against the artist, but they stated they must respect his freedom of expression.

No such liberties were granted to Mabulu on Wednesday, however. Given that he’d put this work on public display – outside one of the biggest financial institutions in the country – the backlash was always going to be fierce. He can count himself lucky if he escapes public indecency charges. 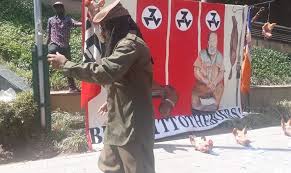 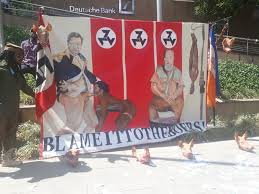 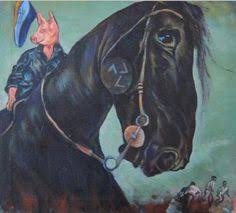