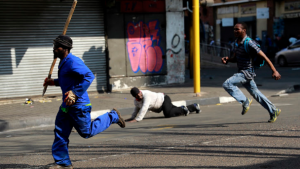 Almost a week after the Joburg CBD erupted into chaos, the police stepped up the pressure and continued with raids, confiscating goods from alleged illegal traders on August 7 2019.

Gauteng premier David Makhura has confirmed that at least 600 people were taken in by police on Wednesday to verify whether they are in the country legally.

They were arrested in the Joburg CBD during a search operation. Firearms and counterfeit goods were among the items recovered in various buildings.

“So far over 600 illegal foreign nationals have been taken in for verification of status in the country and criminal records,” tweeted Makhura.

“Six rifles, six pistols, four shotguns and hundreds of [rounds of] various ammunition [have been] seized. Large consignment of counterfeit goods [has been] found in different buildings.”

Police spokesperson Brigadier Mathapelo Peters earlier said police were conducting a raid after closing off Von Wielligh and Rahima Moosa Streets. “We are raiding the buildings. We are confiscating counterfeit goods. We also arrested undocumented foreign nationals,” she said.

The raids come after a crowd of people attacked police with bricks and stones in retaliation to a crackdown on the sale of counterfeit goods in the city last week.

“We are cleaning up our CBD. We will not rest until we take our city back. We are sending a very strong message to all those who think they can occupy our buildings illegally,” tweeted Makhura.