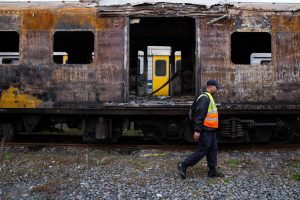 Commuter activist group #UniteBehind has asked why Prasa is not fixing its out-of-service fleet. This follows last month’s unveiling of two new trains. Minister of Transport Blade Nzimande said 95 new trains will be supplied by August 2020.

As Prasa focuses on the distribution of new trains, nearly half its countrywide fleet is out-of-service, either for maintenance or because of vandalism, arson and accidents. This is according to the 2020/22 Prasa Medium Term Expenditure Framework (MTEF) corporate plan published on 31 March.

Of these, 174 available trains, only half have the standard 12 coaches.

“This decline happened despite the general overhaul programme and repair interventions that amounted to billions of rand,” according to the document.

All of these shortages contribute to the delays that have been plaguing the rail system and affecting commuters for years. According to data in the 2019/21 Prasa MTEF corporate plan, the Western Cape has an average train delay of 21 minutes; KwaZulu-Natal trains have an average delay of 31 minutes; and Gauteng trains have an average delay of 45 minutes. But these data are from 2016. (GroundUp was unable to verify these estimates, and are a little sceptical of them.)

Prasa reports that track condition is deteriorating across all regions, as measured by the Track Quality index. This deterioration of infrastructure leads to the implementation of more speed restrictions for the safety of commuters, which then translates into slower trains and increased delays.

The delays and overcrowding have caused commuters to become unwilling to buy tickets. According to the 31 March document, Metrorail is recording fewer than 700,000 passenger trips per weekday when it is supposed to be capable of carrying 2.5 to 3-million passengers per day.

The estimated number of passenger trips for 2018/19 is 213-million, less than one-third of the number a decade ago.

-Daily Maverick
This report does not necessarily reflects the opinion of SA-news.