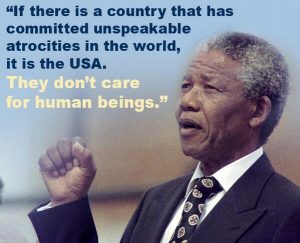 For someone with open eyes, Obama’s propaganda, was certainly a comical tragedy playing itself out.

The biggest joke however belongs to Shinto Abe of Japan where no “refugees” have been taken in and islam is not tolerated and has an extremely homogeneous population with its associated higher IQ:

“The world has changed drastically since the UN was established, and the evolution toward a borderless world is continuing, posing new challenges to mankind. It is therefore essential that the role of the United Nations evolves to meet those challenges.

Japan is the second-largest financial contributor to the United Nations.

How can it be that they promote and fund world supremacy through the United Nations and the destruction of all cultures,nations and race yet keep their own pure and separate? Much like Israel, who also have taken no refugees yet promote mass immigration to other countries and who have 13 metre walls to keep migrants out where judaism is the state religion and genetic heritage is highly promoted and even enforced.

And surprise surprise, Israel also has an above average IQ rating.

Seems if you want a country with a high IQ and a High standard of living you should have high walls (or be an island), keep islam out but promote the destruction of other nations, just do not admit that you see them as enemies. (Keep your friends close but your enemies closer?)
Could the race war be alive and well with MultiCulturalism being a tool to race supremacy and Europeans the stupid hapless unwitting losers? It really is not rocket science that racemixing destroys diversity and promotes dysgenics. The facts and figures speaks for themselves, but shhh it is not PC to say so and the mass media are apparently totally oblivious to all this. But back to the smarmy black slave to Globalist Oligarchs who has put himself on the same level as God in front of the UN by saying we can be co-workers with God:

In his final address to the UN General Assembly (Thank God), Barack Obama patted himself on the back for betraying the US by putting other countries interests first (at the behest of his masters, Globalist Oligarchs like George Soros who has funded him all along). He criticized those who do not allow themselves to be conquered, promoted his bosses Final Solution to world trade domination, the trade agreement TPP, and mentioned the fight against ISIS only in passing despite the fact that this very week US has been caught out multiple times aiding ISIS whether by accident or design.

Stupidly and maliciously putting colonialism and communism in the same basket, Obama said that their demise gave more people a choice and increased the number of democracies. He compared the “wasteland” of North Korea to South Korea, as proof that command economy doesn’t work, but did not mention years of US and UN sanctions against North Korea. Nor did he mention that liberalism is the new communism. He “commanded” advanced economies to do more to close the gap between rich and poor nations, but warned that helping undeveloped countries out of poverty ought to take a back seat to fighting climate change. Clearly the objective is not to help poor already conquered and dominated nations but rather to put the agenda of world supremacists first. Does Obama really think he can control the worlds climate, or is that just the go to scapegoat strawman, whenever the enforced policies of his world supremacist owners destroy entire populations and drive them deeper into poverty and starvation?

A ‘force for good’ where good = evil (I will destroy your country with niceness – be nice to your natural evolutionary enemies so they may assimilate you while NWO plunders your resources).
Justifying his country’s supremacist agenda as a world superpower, Obama nonetheless said he believed the US has been “a force for good,” the rare superpower in history able “to look beyond its narrow self-interest”. Certainly Hitler also had the very best of intentions for his people and Europe. Bragging that the US respects the interests of others by binding itself to international law is an admission that USA is already following the laws of the New World Order and the One World Government (UN). Obama criticized Russia and China for what he said was strong-arming neighbors and militarizing some “rocks and reefs” – referring to the South China Sea – while arguing that the US believed in laws and peaceful resolution of disputes. Yet the truth is there is not a single country in the world that the US.Gov is not manipulating in the background, from funding students protests in South Africa to backing rebels in any country who has not subscribed to the New World Order, no matter what the policy of these rebels are. The Prime Directive is destruction of all nation states destruction of all cultures, destruction of all religions, destruction of all races and even destruction of sexes.

The outgoing US president criticized his country for having too much money in politics and restrictive voting laws, while blasting the EU bureaucracy in Brussels for being too detached and unaccountable to the people it ruled. Countries preaching democracy abroad should “strive harder to set a better example at home,” he said. Really? the man who has signed more executive orders to enforce his policies on America than any other President?

Then followed a tirade of untruths and dishonest rhetoric displaying just how delusional this rabid communist world supremacist is.

“I do not think America can or should impose our model on other countries,” Obama said, but added that there was an ongoing conflict between liberalism and authoritarianism, in which he was not neutral.“I believe in a liberal political order,” he said. Of course enforcing “liberalism” aka Communism and Marxism through the barrel of a gun or with executive orders is not Authoritarian? Obama is a liar, worse even than Blair.

Such an “Order”, he explained, is what globalization has been about in the quarter-century since the Cold War ended. Here he just admitted that there has indeed been a secret agenda behind the scenes to create a One World Order!

America was nominated post WW2 to be the strong arm to enforce this Order, which is why all other politicians who have been captured (bought, blackmailed, brainwashed), deprecate to US.Gov.

“The integration of our global economy has made life better for billions,” he said, noting that the share of world population living in extreme poverty went from 40 percent to 10 percent. Care to fact check that? The mass immigration crisis proves the opposite.

“The world is by some measures less violent and more prosperous than ever before,” he said. Because the benefits of globalization have not been evenly shared, however, “our societies are filled with unease and strife.” Obviously he just watches the Clinton News Network (CNN) so would not be aware of all the riots, terrorist attacks and violent crime and murder going on worldwide.

He admitted that globalization (sending jobs abroad to 3rd world countries and importing migrants who put downward pressure on wages), and the rapid progress of technology have diminished the ability of workers to earn a decent wage, with many good paying jobs disappearing, Obama commanded his fellow world supremacists “not to waver”. Like Lenin, he does not care if two thirds of the world perish, as long as those that remain are obedient and ignorant and servile.

The only reason he could make this speech without being laughed out the room or locked up for frothing world supremacy in every sentence, is because most of those listening to him have also been captured by the Supremacist Oligarchs, Political Elites under direction of a small Cabal who have been pursuing their agenda of “incrementalism” under the guise of “progressiveness” for a century.

Let’s be VERY clear, if the current generation of political traitors fails to bring about world supremacy, the next generation which have been schooled in institutions totally devoted to teaching servility in a One World Order will try again and again. The Cabal have all the time, all the money, and all the resources, including the entire US Army at their disposal.
So, just where has all the worlds gold gone?

The easiest way to conquer the world is to convince them to be friends with their enemies, then sit back and watch them destroy themselves, while you raid the treasuries…